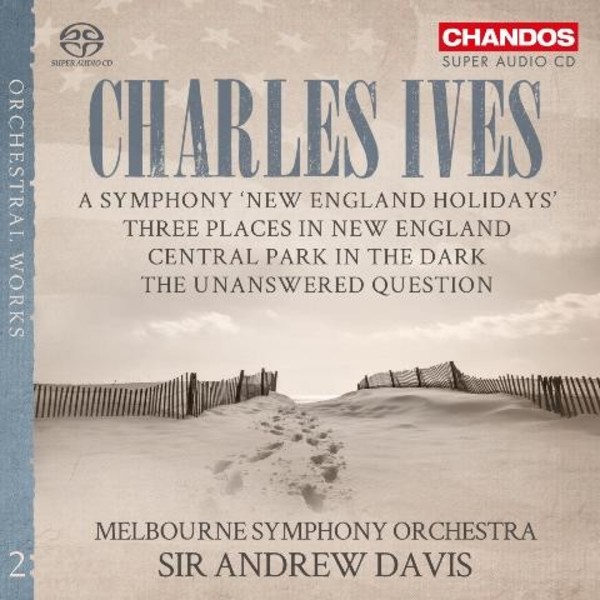 In this second volume, the Melbourne Symphony Orchestra and its chief conductor Sir Andrew Davis play some of the most characteristic pieces of Charles Ives, an insurance salesman by trade and one of the most precociously original of all American composers.

Three Places in New England  composed between 1912 and 1916 and revised several times, as most of Ivess pieces were  was one of Ivess first major works to receive long overdue attention. It is performed here in its fully orchestrated version, as Ives conceived it at an early stage. The first movement, characteristically, features a superimposition of various thematic fragments of popular melodies accompanied by a simple march beat of timpani and lower strings.

The album also features A Symphony: New England Holidays, its four constituent movements (marking national holidays) forming a chronological sequence of the seasons. They can perfectly well be performed in isolation however, which is why Ives chose not to include the work amongst his numbered symphonies.

Central Park in the Dark and The Unanswered Question are shorter, companion pieces, the essential light heartedness of the former pointedly contrasting with the more serious metaphysics of the latter.

[...] its rare to hear a recording in which so much of the detail in these teeming scores has been captured. One might can quibble over some passages  there are a moments that do seem too contained and civilised, when a bit more untidiness and wildness might have been appropriate  but overall it is a wonderfully realised collection of some of the most remarkable American music of the 20th century. Andrew Clements
The Guardian 15 January 2016