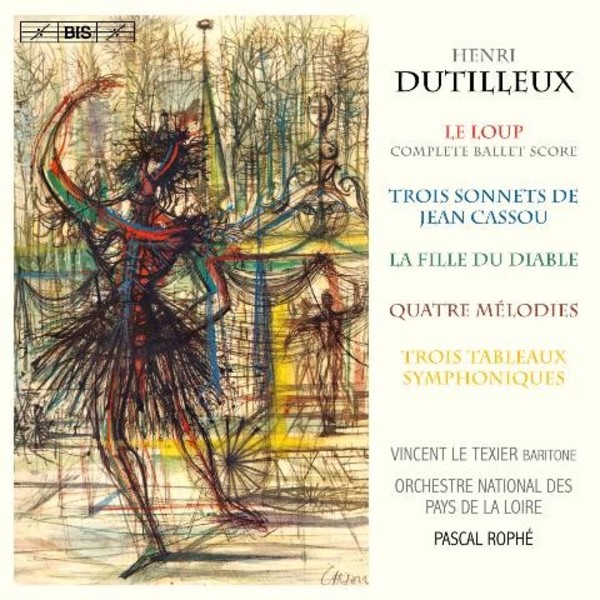 The name of Henri Dutilleux (19162013) is associated above all with orchestral music. His international reputation originated with the Second Symphony, Le Double (premièred in 1959) and was confirmed by works such as Métaboles and the cello concerto Tout un monde lointain But what about before that?

In the centennial year of the composer's birth, the Orchestre National des Pays de la Loire and Pascal Rophé present a programme which focusses on works composed before 1954, and offers the opportunity to discover a less familiar but by no means negligible side of Dutilleux's creative activity: songs and music for the theatre and film.

Several of the works on this disc are recorded for the first time in these versions, or indeed at all. Performed by the French baritone Vincent Le Texier, Éloignez-vous  one of the Cassou settings  and Quatre Mélodies appear for the first time on disc in the version for orchestra.

The complete score of the ballet Le Loup only exists in a recording made in 1954, while the Trois Tableaux symphoniques  originally composed as incidental music for a stage adaptation of Wuthering Heights  and the extracts from the film score La Fille du Diable are here made available on CD for the first time.

Among the plethora of releases celebrating the Henri Dutilleux centenary, this new disc from BIS occupies a special place. For the most part it explores music from before Dutilleuxs compositional maturity, shedding new light on his work in the immediate post-World War II years. Famously, Dutilleux disowned most of his early works, so that the pieces gathered on this disc (two of them appearing on CD for the first time) will have a special fascination for admirers of this fiercely independent French master.

Pierre Gervasoni's booklet essay is entitled Song, Stage and Screen: the lesser-know Dutilleux, which neatly sums up the contents. The main work is the ballet music for Le Loup (The Wolf, 1953), its first complete recording since 1954. A variation on the Beauty and the Beast tale to a scenario by Jean Anouilh and Georges Neveux, this is as sumptuously scored as one would expect, a gripping and highly effective amalgam of Ravel-like orchestration, the neo-classicism of Stravinsky and Les Six, and even a touch of Shostakovich and Prokofiev thrown into the mix. Derivative it may be, but it's also undeniably compelling.

Altogether more serious in purpose are the Three Sonnets of Jean Cassou (1954), settings from the 33 Sonnets composés au secret (1944) from Cassou's time in the Résistance. These are weighty and uncompromisingly bleak, the first two almost violently so, the third more reflective, and the whole is so skilfully scored that the cumulative effect is immensely powerful, especially when performed as urgently as they are here by the baritone Vincent Le Texier.

At the other end of the spectrum are six extracts from Dutilleux's score to the 1946 film La Fille du Diable. These are more than just the work of a talented jobbing composer, for they show real flair in the medium. The second movement (no.3) is a set piece in the 'chase' genre, while the waltz of Une fête au château is pure Ravel, straight out of La Valse, and would make a lovely orchestral encore.

The Quatre Mélodies (1941-43, recorded here for the first time in the version for voice and orchestra) were composed at the instigation of the great Swiss baritone Charles Panzéra, whom Dutilleux met as a result of winning the Prix de Rome in 1938. Beautifully crafted and immensely entertaining (not least the second, Fairy Play by Moonlight), the text is pointed expertly by Le Texier, with telling instrumental detail from the orchestra

Rounding off proceedings are the three Tableaux symphoniques from music for a stage version of Wuthering Heights (Les Hauts de Hurlevant, 1946). These are strongly flavoured by the inclusion of the ondes martenot, played here by Valérie Hartmann-Claverie. Intended to evoke the howling of dogs on the heath, they don't quite convince, but although as an effect the sound might feel somewhat dated, it does lend the score an unmistakably haunting quality, especially when coupled with some thrilling horn playing.

Centenaries can be useful, and none more so than in giving us this wonderfully rich and tuneful score [Le Loup], ranging from the sensuous to the jaunty, from the lyrical to the terrifying. [...] The playing throughout the disc is superb, using a vast range of dynamics. Roger Nichols
BBC Music Magazine March 2016