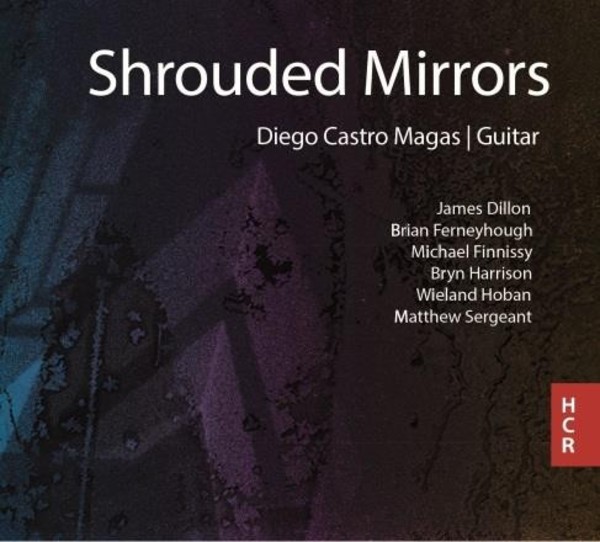 All the pieces on this disc are in some way related to the idea of complex music as they portray highly rationalized materials and notated challenges. I imagine these pieces as standing in front of other reflections, forming labyrinths. And those reflections are the metaphorical domains of these pieces, namely poems, images, places, other performing traditions and the past of the guitar itself. - Diego Castro Maga

In 'Shrouded Mirrors', Chilean virtuoso Diego Castro Maga champions recent British guitar music. The collection explores extremely demanding works with radical aesthetics and highly suggestive content. In doing so, Maga explores the evocative quality of the instrument through extremes of both intimacy and violence. As a result of close collaboration with the composers involved, the recording includes innovative and authoritative versions of pieces by Brian Ferneyhough and James Dillon, as well as world premiere recordings of music by Matthew Sergeant, Bryn Harrison, Michael Finnissy and Wieland Hoban.

Diego Castro Maga is a Chilean virtuoso guitarist, currently based in Huddersfield, UK. Since 2006 he has been particularly interested in guitar music of radical aesthetics. Castro Maga has been recognised in numerous international guitar competitions and has appeared as soloist in more than eighteen countries throughout Europe, the Americas and Oceania, with a particular interest in new music. Diego has collaborated with composers including Aaron Cassidy, James Dillon, Brian Ferneyhough, Michael Finnissy, Bryn Harrison, Wieland Hoban, Clemens Gadenstätter and Matthew Sergeant, amongst others.