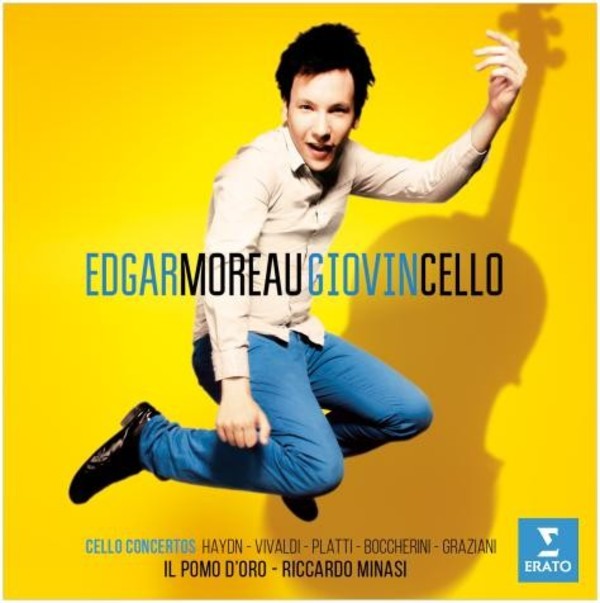 Cello Concerto in A minor, RV419

Cello Concerto in A minor, RV419

Though the title 'Giovincello' seems to make a specific musical reference, it is simply an affectionate Italian term meaning young man. The cellist Edgar Moreau is still only 21, but he is already recognised as an exceptional artist and, with his 2014 debut album 'Play', he has already found his place in the great tradition of French cello-playing (Diapason).

On his follow-up album 'Giovincello', accompanied by Riccardo Minasi and Il Pomo dOro, Moreau brings youthful energy and virtuosic thrills to Haydns Cello Concerto No.1, 18th-century Italian works by Vivaldi, Boccherini and Platti, and a concerto by Baroque composer Carlo Graziani in its world-premiere recording.

In the summer of 2015 Edgar performed in a series of five concerts at the prestigious Verbier Festival in Switzerland, where his colleagues included such distinguished fellow-cellists as Lynn Harrell, Mischa Maisky, Gautier Capuçon and Frans Helmerson, with whom Moreau studies at the celebrated Kronberg Academy near Frankfurt.

In 2011, when he was just 17, he took Second Prize at Russias formidable Tchaikovsky Competition, having previously won the Young Soloist Prize in the 2009 Rostropovich Cello Competition in Paris, and he has since performed with such distinguished musicians as Valery Gergiev, Gidon Kremer, András Schiff, Yuri Bashmet, Krzysztof Penderecki, Gustavo Dudamel, Renaud Capuçon, Nicholas Angelich, Frank Braley, Khatia Buniatishvili, Gérard Caussé and the Talich Quartet.