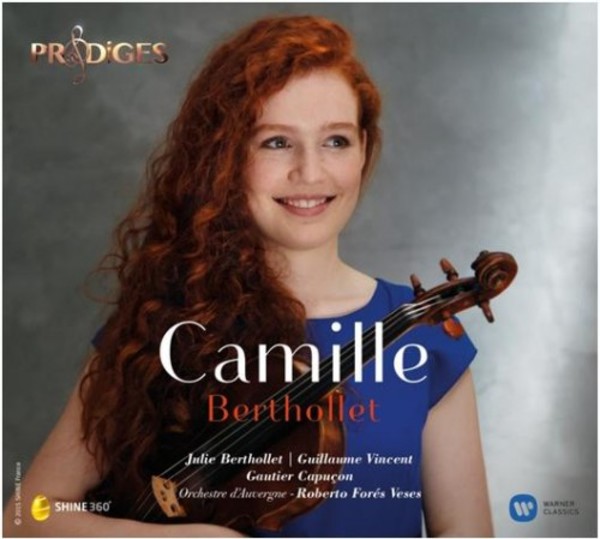 Passacaglia in G minor for violin and viola (after Handel)

Navarra: Spanish dance for 2 violins and piano, op.33 (with orchestra)

Passacaglia in G minor for violin and viola (after Handel)

Navarra: Spanish dance for 2 violins and piano, op.33 (with orchestra)

On 27 December 2014, in front of a televised audience of 4.5 million viewers  and without even a hint of stage fright  a flame-haired 15-year-old violinist was crowned winner of the first-ever Prodiges (Prodigies) competition for young musicians and dancers, produced by Shine France and aired on France 2.

Camille Berthollet astonished judges, including star cellist Gautier Capuçon, with an electrifying Presto from the Summer concerto of Vivaldis Four Seasons. You can sense in her such a passion, she is really inside the music She is so young but she already has this internal spark and this energy, he said of his protégée.

But Camille is not your standard child prodigy. Born in 1999, she asked her parents for cello lessons at the age of three  violin followed five years later and she quickly excelled as a virtuoso on both instruments, studying in Geneva, Lyon and at the Indiana University Jacobs School of Music. She has already performed on Stradivarius and del Gesù violins in Europe, Asia and the United States.

Soon after the show aired, Camille signed to Warner Classics as an exclusive artist, recording this, her debut album, 'Prodiges' (Prodigies). The contest hasnt changed my life, but it has opened wonderful doors to me, the most marvelous one being sought out by the president of Warner Classics, Alain Lanceron, she recalls. They suggested I record my first album and that I could choose the programme freely.

What sets Camille apart from many other gifted Wunderkinder may be her idyllic upbringing in the Rhône-Alpes region of Annecy  surrounded not only by music, but also by familial support rather than pressure, growing up playing in duets with her older violinist sister Julie, now 18.

Im lucky to have my sister Julie always close to me. We learn a great deal from one another, shes a wonderful violinist and I can always lean on her. So naturally, I wanted to make this album with her! I also had the great fortune to record with Gautier Capuçon.

To record this album at 16 years of age is an out-of-the-ordinary experience that I had only dreamed of, she enthuses.