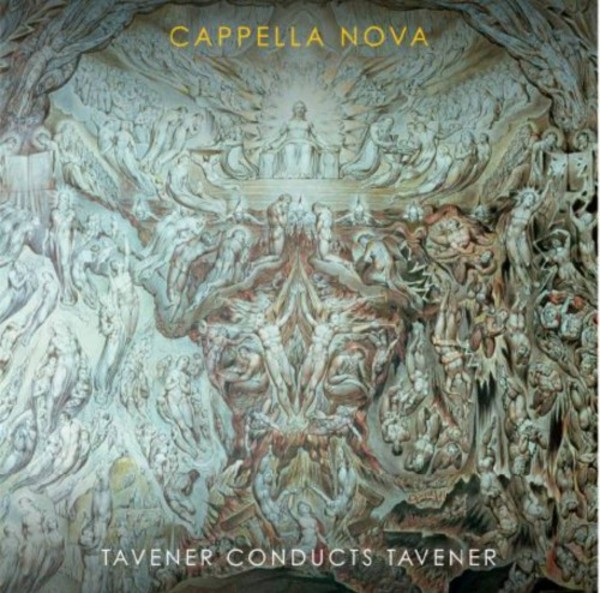 A Buddhist miniature
A cradle song
A new commandment
Ikon of the Nativity
Nunc Dimittis
O, Do Not Move
O that we were there!
Resurrection

A Buddhist miniature
A cradle song
A new commandment
Ikon of the Nativity
Nunc Dimittis
O, Do Not Move
O that we were there!
Resurrection

Tavener wrote some of the twentieth centurys most beautiful choral music - works such as 'The Whale' and 'Song for Athene', which was sung at the funeral of Princess Diana, ensured he remained one of the most popular contemporary composers until his death in 2013.

Including works from across the choirs twenty five year collaboration, this recording is bookended with choruses from the first piece Tavener ever wrote for Cappella Nova, Resurrection.

It also features nine premiere recordings, including A Buddhist Miniature, commissioned to celebrate Cappella Novas thirtieth anniversary in 2012, A Cradle Song and O that we were there!.

A brand new commission in memory of Tavener from his pupil and friend Ivan Moody, O isplendor, also receives its premiere here.

Ikon of the Nativity and Taveners mesmerising and atmospheric Christmas hymn, The Lamb, with its beautiful simplicity and lush harmonies, lend a timely seasonal feel to the programme.

Cappella Nova is famous for its performances of contemporary music (The Guardian), having commissioned and premiered more than 90 new works, including James MacMillans cantata for Holy Week, 'Seven Last Words from the Cross' (1994).

Cappella Nova has an unrivalled reputation as champions of Scotlands unique treasury of early vocal music. Highlights over the past thirty years include winning a Glenfiddich Living Scotland award for their ground-breaking performances of Scottish early music and performing in the presence of The Queen.

Cappella Novas previous recordings, 'Tenebrae' and 'Who are these Angels?' were both named Gramophone Choice.