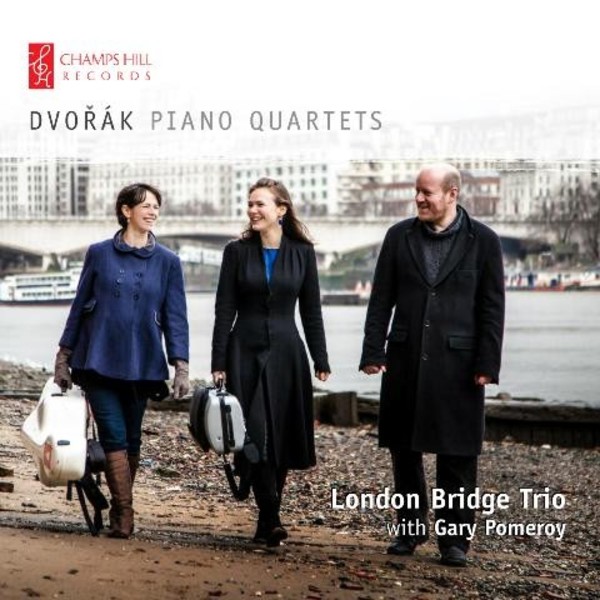 The London Bridge Trio  Daniel Tong (piano), Kate Gould (cello) and Tamsin Waley-Cohen (violin)  made their Wigmore Hall debut in 2005 and perform widely around the UK, programming composer-led themes. Their first recording was of the music of Frank Bridge, from whom the group takes its name. They are joined on this new Dvořák recording by South African Gary Pomeroy.

Imbued with the spirit of his Czech homeland, the chamber music of Antonin Dvořák is a great treasure of romantic music. This is music that is hugely liberating and enjoyable to play, say the group On the one hand, we cannot help but share in Dvořáks natural exuberance. On the other, he occasionally requires the utmost intimacy and profound introspection. We are asked to revel in the spirit of Czech and gypsy music in conjuring up the sounds and instruments of the folk band; to sing and to dance.

Inspired by Schubert, Dvořák, still in his thirties, is also laying the foundations of composition that would last him a lifetime in his Piano Quartet No.1 in D Major, Op.23. Composed 14 years later, by which time Dvořák was now an internationally famous composer, the Piano Quartet No. 2 in E-Flat-Major, Op.87 was eventually completed after much pestering from his publisher Simrock. We are fortunate that he was so persistent  this quartet, which looks to Brahms, is one of Dvořáks mature masterpieces and a favourite of audiences.

The London Bridge Trio brings this unfamiliar work [op.23] to life as if it were an old frined, with expressive string playing and a constantly arresting rendition of the piano part. [...] The players succeded unerringly in the first movement [op.87], getting its alternation of fibrous development, melodic relaxation and abundant subtlety just right. [...] Presented in a well-balanced recording, this is first-rate chamber music performing without any obtrusive grand standing. Jan Smaczny
BBC Music Magazine March 2016