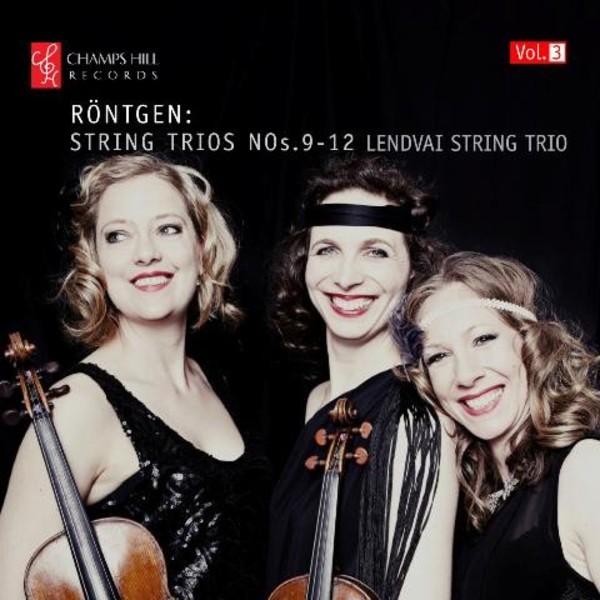 The Lendvai String Trio release the third disc in a series of the complete String Trios by Dutch composer Julius Röntgen (1855-1932).

The trios journey began in 2007 when they stumbled across Röntgens first string trio (the only one published to date), and soon after discovered that there are fifteen more, carefully stored in handwritten manuscript form in the Netherlands Music Institute in the Hague.

A major award - The Kersjes Prize - and support from Champs Hill Records has enabled this project to be realised.

A unique feature of these works is its numerous references to traditional Dutch tunes and dances. Röntgens interest in folk music was largely due to his friendship with Edvard Grieg, with whom he travelled through Norway in search of Norwegian folk songs. For Röntgen it became important to do the same for the traditional music of Holland, and he considered the dissemination and popularization of his national music as one of his most important tasks.

The Lendvai Trio are Dutch violinist Nadia Wijzenbeek, Swedish violist Ylvali Zilliacus and British cellist Marie Macleod. Since their Wigmore Hall debut in 2006, the Lendvai String Trio has had a busy schedule of concerts at major venues throughout Europe, including several re-invitations to Wigmore Hall, recitals at Kings Place, the Barbican and Purcell Room in London, the Concertgebouw in Amsterdam and Musikaliska in Stockholm.

... theres an order of mastery casually involved here thats quite out of the ordinary. - International Record Review

The Lendvai Trios enthusiasm for these works compels attention, and one can hear the broad grins on their faces as they played... - Gramophone

Born in Leipzig to a Dutch father who was violinist in (and subsequently leader of) the Gewandhaus Orchestra, Julius Röntgen was immersed in the central European musical tradition from an early age. He studied music in the city with such figures as Lachner and Reinecke, and served as accompanist to the great baritone, Julius Stockhausen. In 1877 he moved to teaching post Amsterdam, and his friends and colleagues included Pablo Casals and Carl Flesch, as well as composers of the stature of Brahms and Grieg (who dedicated his Lyric Pieces to Röntgen).

Most of Röntgen's large output of chamber music  often intended for domestic performance within the family circle  remains unpublished, and the rediscovery by the Lendvai String Trio of the complete string trios brings with it a chance to get to know the work of an important figure in late Romantic music. Röntgen may have been Dutch, but his music combines a Germanic rigour and technical security with a Nordic delight in natural surroundings.

This third volume in the Lendvai Trio's four-disc project to record all of Röntgen's string trios contains four works composed in the mid-1920s. Röntgen took a keen interest in the music of his time, including Stravinsky and Schoenberg, but his own music remains firmly anchored in late Romanticism, of the non-programmatic variety championed by Brahms. The Trio No.9 in A flat (first on this disc) is more redolent of Brahms's protégé Dvořák in its airy good humour, albeit with occasional harmonic twists (such as 20 seconds into the first movement) that hint at its later date. The slow-scherzo-like second movement combines grace with wistfulness, and although the minor-key finale shifts to a more energetic mode, the prevailing mood is one of perfect harmony.

The F minor Trio (No.10) feels a little more Brahmsian, though with a Nordic twist in the central Andante. In the Allegro affettuoso finale, the Lendvai players emphasise the music's gentle gracefulness, which the minor key does nothing to disturb.

By 1925, when he composed Trios 11 and 12, Röntgen had retired from his teaching job at the Amsterdam Conservatoire to a new family home in the village of Bilthoven near Utrecht. A more relaxed frame of mind is perhaps hinted at in the dimensions of the longest work here, the G minor Trio (still under 20 minutes), and again  notwithstanding the minor key  the atmosphere is one of happy relaxation, again with moments of delight in nature à la Dvořák or Grieg.

In the A major Trio (No.12), the spirit of dance hovers over the music. The opening movement is a charming waltz with an arresting opening, and the second movement Pastorale is followed by an affecting minuet. The only work here in four rather than three movements, it ends with a lively grand finale which pits the players playfully against one another, before a rhythmic reminiscence of the first movement brings the music to a joyous close.

This is music of unfailing charm, brought vividly to life by the Lendvai players, who obviously to relish every minute. For lovers of chamber music, this series on Champs Hill Records is a unique opportunity to discover some real treasures. In excellent sound and with useful and extensive notes by Maragret Krill, it's an easy recommendation.