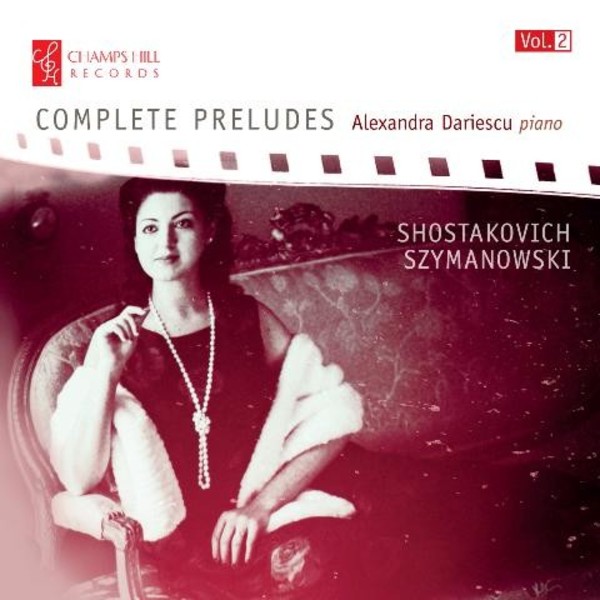 Volume 2 of Alexandra Dariescus series of complete piano preludes presents the music of Shostakovich and Szymanowski.

Her initial release of music by Chopin and Dutilleux was highly praised by critics: Dariescu is a deeply impressive exponent of both composers work, bringing to every piece the lucidity and sensitivity it commands (Sunday Times); Each is a perfect gem, which Dariescu opens up, layer by layer, like a Russian doll (Norman Lebrecht, sinfini.com).

Alexandra writes: Shostakovichs Preludes are a mirror of sarcasm, they are depictive, full of irony, in many ways like circus music combined with romantic sentimentality while Szymanowski paints images of the soul; his music is storytelling, as if an old man talks about his life, with regret, caressing every sound and every feeling.

She also says As for the CD cover, I had this firm image of Shostakovich in his younger days playing the piano in the cinema for a silent film which was so popular in the 1930s when he wrote his Op.34.

Shostakovich came to adulthood in an age of catastrophic instability and in 1919, when the thirteen-year-old enrolled at the Petrograd Conservatory, he walked miles each day to attend. During this time he began a cycle of preludes in collaboration with two college friends, Pavel Feldt and Georgi Klements. 18 were completed and in the mid 1960s he returned to the manuscript and selected the five of his eight for publication as a group in the official collected edition of his works.

His other cycle, Op.34, was begun in December 1932 (at the same time he was working on Lady Macbeth of the Mtsensk District) and written swiftly, with the first complete performance given in Moscow in May 1933.

Szymanowskis Nine Preludes Op.1 reflect the young composers considerable knowledge of Chopin and of German Romantic repertoire, with two of the preludes written at the young age of fourteen. The collection as a whole can be seen as a bridge between Chopins great achievement and the artistic aspirations of young Polish composers at the turn of the twentieth century.