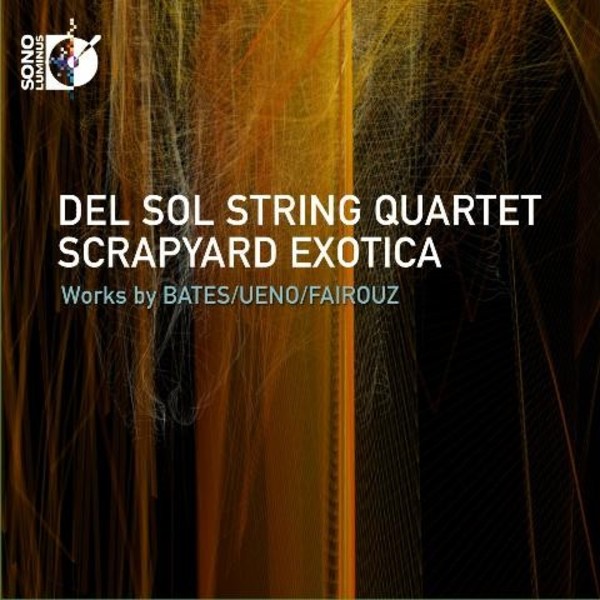 Bagatelles for string quartet and electronica

Bagatelles for string quartet and electronica

'Scrapyard Exotica' is Del Sol String Quartets third full studio album from Sono Luminus. The triumvirate of composers featured on this album represent leading voices in very different flavours of music within the classical avant-garde. Diverse influences run the gamut from club beats, to throat singing, to Middle Eastern dance rhythms, from the melodic beauty of Schubert to swinging jazzy grooves to the world of science fiction. Yet each voice is firmly rooted in the here and now, sharing their experiences of life in the 21st century.

Live audiences have been equally stunned by the power of each piece and we are thrilled to bring these recordings to those who havent yet heard them in the concert hall. The album begins with Mason Bates four exciting 'Bagatelles for String Quartet and Electronica', which was made in collaboration with Del Sol by playing with new sounds in the studio. Mason the alchemist took our experiments in the studio and morphed them into the electronica track that you hear in Bagatelles", says violist Charlton Lee.

Second on the album is the thrilling 'Peradam' by Ken Ueno, which utilizes throat singing. As Lee puts it, Learning this piece became an incredible physical journey for the quartet, in addition to a sound world odyssey. Last is Mohammed Fairouzs beautifully meditative piece in four movements: 'The Named Angels', which refers to those angels that are named and recognized in the Islamic, Christian and Jewish traditions: Michael, Israfel, Gabriel and Azrael.

Hailed by Gramophone as masters of all musical things they survey", the San Francisco based Del Sol String Quartet, two-time winner of the top Chamber Music America/ASCAP Award for Adventurous Programming, commissions and performs outstanding new works from around the world and provides innovative educational programs. Founded at Banff Centre for the Arts in 1992, the ensemble enjoys a unique vantage point.

From its West Coast perch, Del Sols performances explore narratives and cultures that represent the depth and range of human experience around the world, reflecting the stories and sounds of the Pacific Rim as vibrantly as those heard in European concert halls or East Coast art spaces. They have released seven prior CDs since 2002, including their first Sono Luminus release ZIA (DSL92164) and the widely acclaimed 'Sculthorpe: The Complete String Quartets with Didjeridu' (DSL92181) in which they collaborated with Stephen Kent.