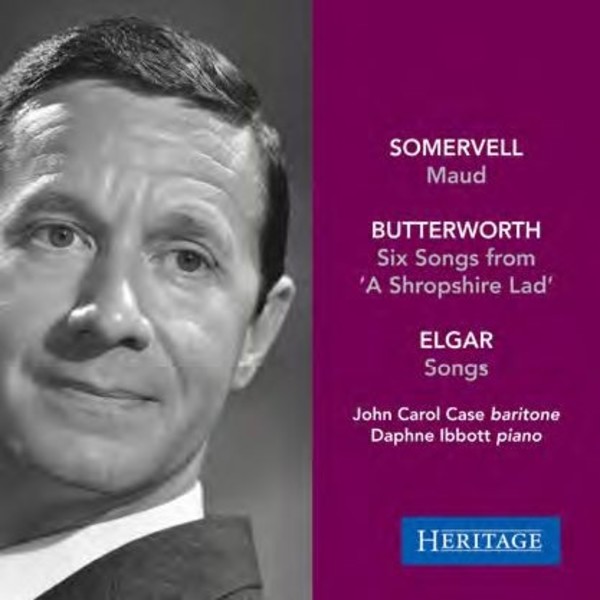 » Modest and fair
» Still to be neat

» Modest and fair
» Still to be neat

The aristocrat of English baritones, said Michael Oliver. John Carol Case was a versatile singer, with a repertoire that stretched from Fauré to Schoenberg, and his noble countenance made him perfect to sing Christ in Bachs 'St Matthew Passion', his signature role. But his eloquent and lyrical voice, combined with his impeccable enunciation, also made him the ideal exponent of English song, qualities that are clearly demonstrated in these recordings of Elgar, Somervell and Butterworth.

These recordings are taken from an early SAGA LP of Elgar songs dating from 1969, and his farewell solo recording for Pearl in 1974 featuring Somervells 'Maud' and Butterworths Six Songs from A Shropshire Lad.

Born in 1923, Case came relatively late to singing, only beginning his studies after his voice had broken at 14. In 1942, he became a choral scholar at Kings College, Cambridge, initially as a countertenor and later as a baritone. He was called up in 1943, but in 1945 returned to Cambridge, graduating two years later. Initially struggling to find work as a singer, Case took up an appointment as director of music at Kings College School in Wimbledon. There he met Ralph Vaughan Williams, and in 1948 sang his 'Fantasia on Christmas Carols' under the composers direction. This began a close friendship and active musical collaboration, with Case recording many of Vaughan Williams works. After the composers death in 1958, Case gave the premiere of the last of his 'Songs of Travel', which had been discovered among his papers.

From the late 1950s, Case devoted his energies exclusively to singing. The composer Gerald Finzi was a decisive influence on Cases early career, steering him in the direction of English song. Elgar was another important composer for Case. The songs featured here demonstrate a natural fluency in Elgars idiom, aided as ever by Cases lyrical phrasing and immaculate diction.

Arthur Somervells song cycle 'Maud' had fallen from favour in the years following the war, but Case was an ardent champion of the work, and his regular performances brought it back to public attention.

Case made a fitting farewell to the stage with a performance of the St Matthew Passion at Leith Hill in 1976. He then turned his attentions to teaching, first at the Birmingham School of Music and later at the Royal Academy of Music in London. Among his pupils during this period was the soprano Lesley Garrett. He became involved in singing competitions, adjudicating for the English Song Award and the Kathleen Ferrier Awards.