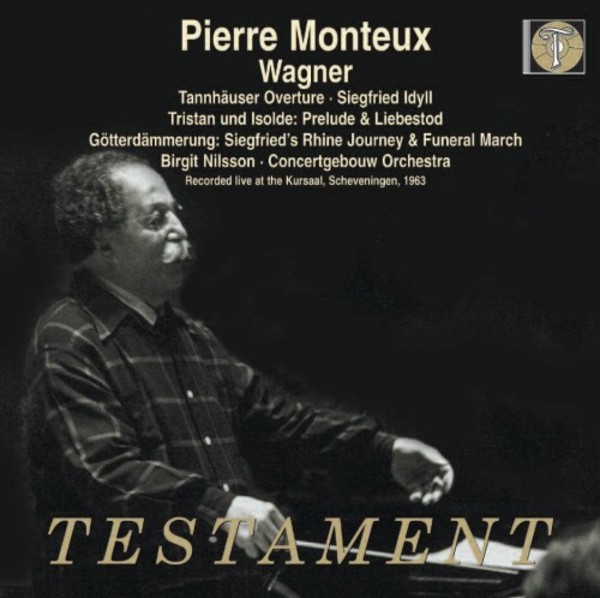 Recorded live at the Kursaal, Scheveningen, 1963

By the 1960s Monteux could conduct practically anything he wanted, which is why in 1963, the year of the 150th anniversary of Wagners birth, he had no difficulty in persuading the Holland Festival to programme an all-Wagner evening. Monteux was in vintage form that summer. An all-Tchaikovsky concert given with the LSO at the Vienna Festival on 31 May had astounded its audience. It was one of those concerts Jonathan Swain later wrote where you feel everyone surpassing themselves, of ensemble-threatening risks successfully taken and of overview and improvisatory freedom somehow held in perfect balance. And so it was with the Holland Festival Wagner concerts a month later.

The choice of soloist was Monteuxs. Having heard a great deal about Birgit Nilsson, he wanted to work with her. Whether he found himself touched by her Isolde is not revealed. He had worked with Lotte Lehmann and the great French soprano Germaine Lubin, both of whom commanded a warmth which Nilsson never entirely possessed. In the theatre, however, her Isolde was by any reckoning remarkable. As is her account of the Immolation Scene from Götterdämmerung in this Holland Festival concert. Indeed some might think it superior to her Vienna studio recording with Solti. The radio transmission gives the voice a more
forward balance than the over-engineered studio version, allowing one to relish Nilssons wordpointing. What is also interesting is that, though the Monteux performance is quicker than Soltis, it appears, for all its rhythmic impetus, to create more space for the singer.

As a student Monteux occasionally supplemented his income by playing in the pit at the Folies Bergère. It was there that my sense of rhythm was formed he told George Gershwin. And there is another memory from those years. At the age of 18 Monteux took over Lucien Capets seat in the Geloso String Quartet. During a visit to Vienna, the quartet was invited to play for Brahms. It takes the French to understand my music, the great man remarked after they had finished. The Germans play it too heavily. Unsurprisingly it was a remark Monteux, whose love for Brahmss music was as great as his love for Wagners, never forgot.