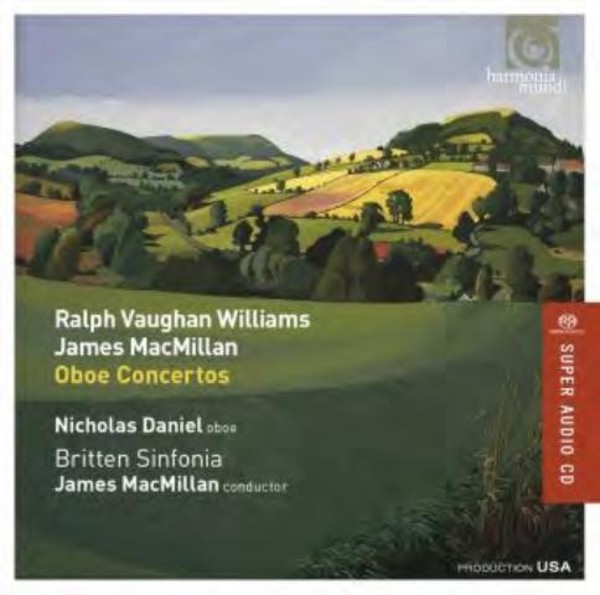 Oboe Concerto
One for chamber orchestra

Oboe Concerto in A minor

Oboe Concerto
One for chamber orchestra

Oboe Concerto in A minor

Composer James MacMillan conducts the world premiere recording of his own Oboe Concerto (dedicated to Nicholas Daniel), as well as his 2012 composition 'One' and the Britten 'Suite on English Folk Tunes: A Time There Was'.

The oboist himself directs the Ralph Vaughan Williams concerto, the work with which he won the BBC Young Musician of the Year Competition at the age of 18.

It's 35 years since Nicholas Daniel won the BBC Young Musician of the Year competition with a performance of Vaughan Williams's Concerto for Oboe and Strings. Since then he has become one of the most experienced and respected oboists in the business, as well as a conductor. Now he returns to the work with which he made his mark, in a breathtaking new recording with Britten Sinfonia. It's a completely captivating performance which he directs from the oboe, and it encapsulates all the magical qualities of Vaughan Williams's late pastoral style, from the opening quasi-improvisatory solos, redolent of The Lark Ascending, through the relaxed playfulness of the 'Minuet and Musette' second movement, to the upsurge of emotion in the Scherzo Finale. Daniel's interpretation speaks of a lifetime's acquaintance, the technical challenges managed with matchless aplomb, while in sensitivity for the idiom soloist and orchestra fit hand-in-glove.

The main coupling is James MacMillan's Oboe Concerto of 2010. Written expressly for Nicholas Daniel, and conducted by the composer, this sets considerable technical challenges for the soloist. According to Daniel, 'It's arguably the most technical concerto in an oboistic sense [] since Elliot Carter's. In fact I have found it harder to learn than the Carter.' Nevertheless, this is an accessible work, infused as it is with MacMillan's own folk music sensibilities. The outer movements are playfully quirky, and though there are full orchestral outbursts, they never drown out the soloist, who showcases a dazzling array of techniques. The central Largo is searingly melancholic, based on MacMillan's earlier work, In Angustiis, a response to the 9/11 attacks. In its new context, it is an excellent expressive foil to the liveliness of the Concerto's outer movements.

MacMillan's Concerto is prefaced by a shorter work, One for chamber orchestra (2012), composed by him for Britten Sinfonia's 20th anniversary celebrations. Inspired by the world of traditional Celtic song, it is an exploration of the coloristic possibilities of monody: a single melodic line which is subject to constantly varying instrumentation and effects, before briefly blossoming into harmony at the end.

Britten's popular late Suite on English Folk Tunes 'A Time There Was' makes the perfect filler, its various moods and textures handled with tremendous spirit and assurance by the orchestra which bears his name. MacMillan again conducts, and Nicholas Daniel returns for the cor anglais solo of the final number, 'Lord Melbourne', while Manon Morris's harp solo in the second movement also deserves special praise.

Enjoying a nicely balanced and focused recording from St John's Smith Square, it all adds up to a splendid celebration of British music, released with perfect timing for the onset of spring.