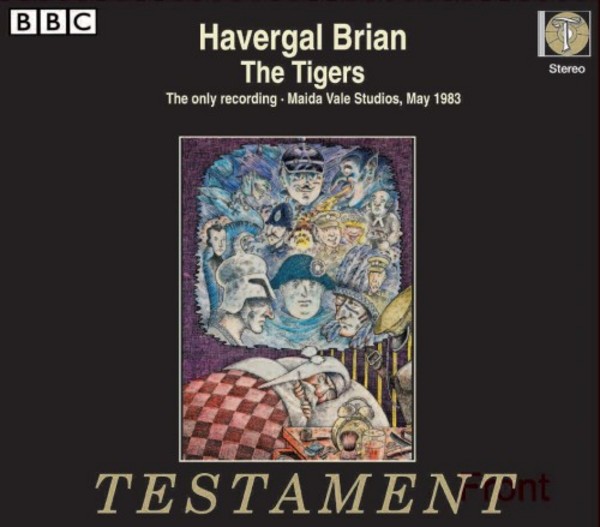 Testament is proud to present the first CD release of Havergal Brians opera The Tigers (composed 191719, orchestrated 192829), from its BBC Radio 3 studio premiere performance recorded in May 1983. Lionel Friend conducts the BBC Symphony Orchestra and BBC Singers, together with a huge cast of some of the finest British soloists of the day. The original performance was enabled by the Havergal Brian Societys rediscovery of the full score, lost since WW2, and this release is issued with the Societys generous support.

The first of Brians five operas, The Tigers is by far his most  original in conception and execution. It opens on a rich and colourful panoply of Hampstead Heath Bank Holiday fun, but it is August 1914, and a poster announces that war is declared and every man under seventy-five is wanted. The main action then goes on to chronicle the misadventures in training of Brians Dads Army-style ancient regiment The Tigers  drawn from his own brief experience as a WW1 volunteer in the Honourable Artillery Company (he was invalided out, due to flat feet[!], before he could see action in the trenches).

The Tigers thread of comic plot and guying of English social pretensions and military protocol have some operatic precedent in Gilbert & Sullivan, but its overall air of dreamlike inconsequence is more in line with Lewis Carroll. It would be equally hard to find any real operatic successor to The Tigers; later antiwar operas like Wozzeck, Kurkas Good Soldier Schweik, or Zimmermanns Die Soldaten are infinitely more savage and hard-edged. Rather the farcical, chaotic (though occasionally nightmarish) mise-en-scène of The Tigers seems again to point outside opera, to The Goons or Monty Python. Its easy to imagine John Cleese & Co. bungling the warnings about Act IIIs Zeppelin attack (which never arrives). But on the other hand, knockabout comedy has no place in the haunting, visionary dream ballets which open that same third Act.

In purely musical terms, there is no parallel in British music of the time for The Tigers brilliantly quirky, hyperactive sound-world and innovatory instrumental resources, ahead in one notable instance of any European contemporary. To match its sheer virtuosity one needs look to Richard Strauss or even Franz Schreker, for the kind of sensuous, iridescent sheen of sonorities with which Brians huge orchestral forces occasionally drench his hapless chocolate soldiers.

Issued with a full libretto, prefaces from original BBC producer Elaine Padmore and conductor Lionel Friend, and copious documentation by the late Havergal Brian expert Malcolm MacDonald, The Tigers is unmissable for any 20th-century opera or British music enthusiast.

Havergal Brian - Symphony no.1 The Gothic