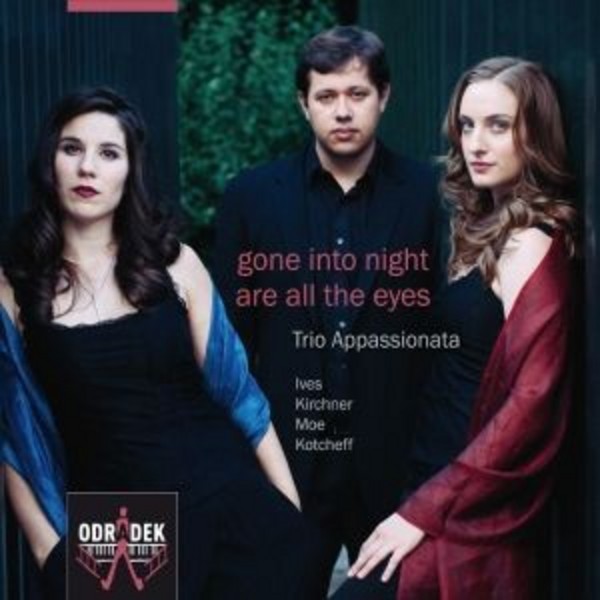 Gone into Night are all the Eyes

Gone into night are all the eyes

Gone into night are all the eyes

The Trio Appassionata, whose members originate in Brazil, Spain and the United States, met as students in Baltimore, and pay tribute to their shared 'American' musical heritage as an ensemble with a disc dedicated to four generations of American composers - Charles Ives, Leon Kirchner, Eric Moe and fellow classmate at Peabody Conservatory, Thomas Kotcheff.

The works chosen range from delicate and fragile to boisterous and even raucous. They run the full gamut of textural possibilities, from complete unity of voice, to dialogue, to opposition, and all the way to the complex layering of different voices - all, however, are driven by expressive imperatives.

The disc takes its name from the mysterious and beautiful Gone into night are all the eyes, commissioned by the trio for this CD from young Californian composer Thomas Kotcheff (b.1988). Taken from the opening line of a poem by Jorge Luis Borges, the title suggests the musics evocative, nocturnal and ambiguous tone. This is the premiere recording of the piece.

The bluesy We Happy Few by Eric Moe (b.1954), a professor of composition at the University of Pittsburgh, has a title which refers to what the composer calls the paradoxical artistic economics of chamber music, wherein less is generally more.

Leon Kirchner (1919-2009), one of Schoenbergs foremost American pupils, is stylistically the most European of the composers here. His Piano Trio (1954), with its stunning variety of colours and moods, is the most conventionally expressive of the four pieces, in a direct line of descent from the Germanic 19th century tradition.

Charles Ives (1874-1954) conceived his Piano Trio as a reflection of his college days at Yale, and the work thus fittingly concludes this disc commemorating Trio Appassionatas formation as conservatory students. Begun in 1904, it had a long gestation period - it was completed in 1911, revised a few years later and not performed publicly until 1948, but it showcases Ives at his best.