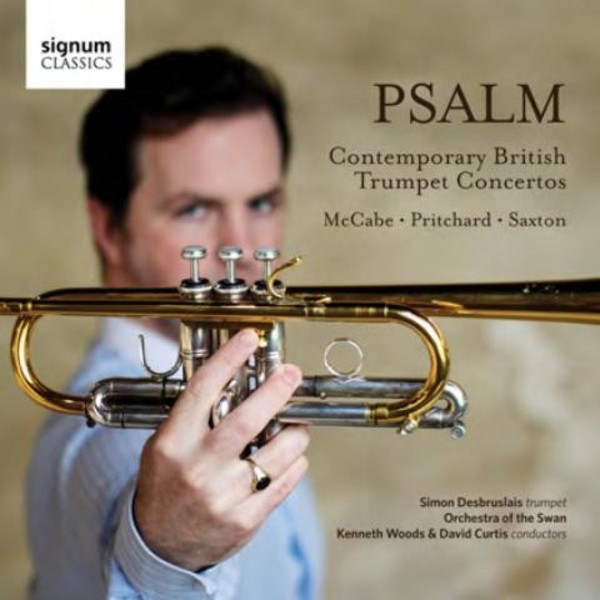 A collection of new works for trumpet and orchestra by British composers Deborah Pritchard, Robert Saxton and John McCabe, performed by renowned trumpeter Simon Desbruslais with the Orchestra of the Swan under conductors Kenneth Woods and David Curtis.

"My work draws its inspiration from the Skyspaces of the light artist James Turrell. His installations take the form of chambers or canopies with a large aperture above that enables the viewer to look at the sky, as if through a frame, and whilst the sun rises or sets lights are used inside the room to affect the viewer's perception. My piece is a reflection on the changing colours of both sky and chamber, and is divided into seven miniatures." - Deborah Pritchard

"The Trumpet Concerto 'La Primavera' is so-called because the initial impulse for the piece came from considering two aspects of the coming of Spring: the exuberance and vitality of burgeoning new growth, and the flowering (literally!) of the new or refreshed life as it expands." - John McCabe

"The shape and sound of 'Psalm - A Song of Ascents' were in my mind long before the title, and when I began work on the score in September 1992 it became clear that the piece was not so much a concerto as a poem for solo trumpet and small orchestra ... The title which I decided on eventually refers to some of the later psalms which, in the King James version, are called Songs of Degrees and in the Revised Versions, Songs of Ascents. I interpreted this as a spiritual (rather than as a literal) ascent, and as I wished to exploit both the singing and the more agile, dancing aspects of the trumpet, the idea of a textless psalm seemed appropriate..." - Robert Saxton

"[Shakespeare Scenes]... it seemed appropriate to pay tribute to Stratford-upon-Avons greatest son. There are five pieces/movements whose tonal centres outline the musical letters of Shakespeares name, so that the latter forms the structural basis of the whole." - Robert Saxton