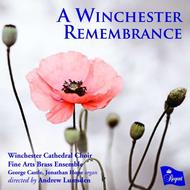 Take him, earth, for cherishing

At the round earth's imagined corners

Lord, thou hast been our refuge

Take him, earth, for cherishing

At the round earth's imagined corners

Lord, thou hast been our refuge

Acknowledged as one of the foremost cathedral choirs in the UK, Winchester Cathedral Choir, under the direction of Andrew Lumsden, present a beautiful selection of music for Remembrance, and to commemorate the start of the First World War.

In addition to works regularly associated with Remembrance Sunday, and the Festival of Remembrance held annually at the Royal Albert Hall, the recording also includes both of William Harris great 8-part anthems, Faire is the heaven and Bring us, O Lord, Herbert Howells magnificent motet on the death of President Kennedy, Take him, earth for cherishing, Paweł Łukaszewskis exquisite Nunc dimittis, and the first recording of Philip Moores major concert work, At the round earths imagined corners, with 9-part brass and percussion, originally written for the Southern Cathedrals Festival.