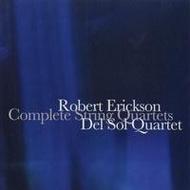 Robert Erickson (19171997), one of the important American composers of the late twentieth century, is fondly remembered as an influential teacher who counted such figures as Pauline Oliveros, Terry Riley, Morton Subotnick and Paul Dresher among his students. The quartets chart his evolution as a composer over the arc of his career.

The first was written in 1950 while he was still in the process of finding his compositional voice and is the most 'classical' of the four, looking back to the Second Viennese School. The Second Quartet (1956) is acknowledged as the watershed moment in his career, the work where the compositional tropes that would characterize his music henceforth first manifest themselves in full.

The final two come from the last stage of his career, just before he was struck down with the debilitating disease that would, for all intents and purposes, end his creative life in 1987. Solstice was written in 1985, almost thirty years after the second, and Corfu followed shortly after in 1986. The quartets are fundamental to any understanding of his work and receive their world-premiere recordings here.

"These four string quartets frame Ericksons entire uvre with remarkable eloquence, from the intellectual, process-oriented First Quartet and the suddenly fully mature Second - still explainable in the context of the main stream of 20th-century music - to the indisputably idiosyncratic valedictory qualities of Solstice and Corfu, which leave conventional analysis irrelevant. This is a historic, definitive presentation of an integrated, fully realized achievement by a necessary master of American music." - Charles Shere