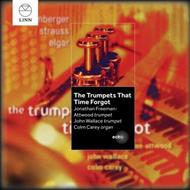 The Trumpets That Time Forgot

In the expansive acoustic of Hereford Cathedral, Jonathan Freeman-Attwood, John Wallace and Colm Carey draw the listener into a late-Romantic world of outstanding and strikingly idiomatic ensemblemusic.

Originally released in 2004, The Trumpets That Time Forgot has been re-issued as part of Linns ECHO series which offers a second chance to enjoy the best of the labels award-winning catalogue.

The Trumpets That Time Forgot deliberately makes up for lost time to give the solo trumpet a richly deserved history in this period.

The Strauss movements provide a trio of light vignettes between the significant four-movement Rheinberger Suite (a Concerto in all but name) and Elgars Sonata. In the case of the latter, this version provides a new dimension to a work which Elgar composed originally as the Severn Suite for brass band and reworked as his 2nd Organ Sonata. Here, the two worlds meet in the middle.

Trumpeter Jonathan Freeman-Attwood is Principal of the Royal Academy of Music in London and also pursues an active career as a performer, writer and award-winning record producer.

John Wallace is principal trumpet with the Royal Conservatoire of Scotland. Long acclaimed as a virtuoso trumpeter, his performances as soloist with leading orchestras and conductors throughout the world have established him as a musician of enormous distinction.

Colm Carey, a leading organist of the younger generation, has gained a reputation as a remarkable and distinctive performer. Colm Carey is much committed to the development of the organ as a chamber instrument and has commissioned and transcribed many works for different media involving organ.