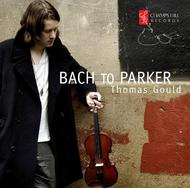 Lines written a few miles below

Lines written a few miles below

Violinist Thomas Gould, born in 1983, is apt to tell interviewers that there is nothing exceptional about his talent. Dont you believe it! He is leader of the Aurora Orchestra and associate leader of the Britten Sinfonia. Gould has further established himself as one of Britains leading solo violinists.

Thom is equally at ease playing Bach and Beethoven as he is performing works by the rising young composers featured on this album, or playing jazz, having joined the swing band Man Overboard in 2011 (their first album All Hands on Deck (CHRCD062) was released by Champs Hill Records in 2013).

Opening with Bach's Chaconne in D minor, the final movement of his Second Partita for Solo Violin, a pinnacle of the repertoire, he moves next to 'La Baroque' by Uzbekistan composer Aziza Sadikova (b.1978), an aggressive take on Baroque manners. A more harmonious take on Bachs legacy is presented by Quasi una cadenza, Op.26, composed in 2002 by Nimrod Borenstein (b.1969).

Rising Scottish composer Anna Meredith (b.1978) describes her piece 'Charged' as having "drive and trajectory by making the violin feel as if it is controlling and suppressing the material and only really letting go towards the end".

Gould has been particularly associated with Nico Muhly (b.1981) since 2008, when he gave the world premiere of Muhlys concerto for six-string electric violin, 'Seeing is Believing', later recording that work with the Aurora Orchestra for Decca, and includes his Long Line on this album.

Two Extremes was written by Ewan Campbell (b.1983) in 2013 for Thom, with the second movement, Everything, all at once, written with Thoms incredible virtuosity in mind, using various musical interpretations of the mathematical Fibonacci series.

Lines written a few miles below, by Mark Bowden (b.1979), was originally conceived as a dance piece and is based on impressions from Londons Underground and its passengers.

BoBop by John Hawkins (b.1949) is a bebop-influenced show piece, bluesy and breakneck by turns. A genuine bebop track associated with another jazz legend, the saxophonist Charlie Parker (1920-55), ends this album.