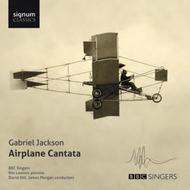 Gabriel Jackson was Associate Composer with the BBC Singers from 2010 to 2013 and this disc collects the very best of this unique collaboration between composer and professional choral ensemble.

The central work, 'Airplane Cantata', premiered by the Singers in 2011, is an evocative tribute to the pioneers of flight and aircraft design, combining texts from early newsreels and pilots' journals, and featuring renowned pianola player Rex Lawson. It is one of the first full length pieces written especially for the pianola since the 1930s.

Gabriel states that in writing this piece he satisfied his obsession with aviation: the technology, the bravery and daring of pilots, the aesthetic beauty of aircraft, the transcendence of flying  and when thinking about what a piece for voices and pianola might be about, I was very struck by the fact that the (brief) heyday of the pianola coincided with the pioneering years of aviation.

The variety of texts used includes eye-witness accounts by Louis Blériot and the musings of Amelia Earhart. The seven-movement work makes full use of the amazing keyboard dexterity possible with the pianolas virtuosic resources and contains the instrumental 'Toccata Aeronautica', a staggering showpiece movement for pianola alone, giving full opportunity to show what it can achieve, but which a pianist, restricted to ten fingers, could not.

World-renowned pianolist Rex Lawson prepared the piano rolls making use of a computer programme which translates staff notation into a machine to punch the rolls, which he devised himself. Rex is a leading exponent of the pianola and works tirelessly to promote this once hugely-popular, but now rather misunderstood instrument.

Gabriel Jackson won his third British Composer Award for 'Airplane Cantata' in 2012. His Choral Symphony, also included here, was shortlisted in 2013. This disc follows in Signum's popular series of recordings showcasing the work of the BBC singers and their associate composers. Previous discs include works by Judith Bingham and Edward Cowie.