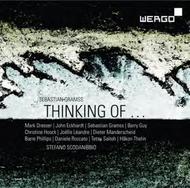 'Thinking of ' is an homage to the double-bass player and artist Stefano Scodanibbio who died before his time in 2012.

This project gathered the crème de la crème of the modern double-bass world. Sebastian Gramss, as the producer, composer and one of the players, pays respect to Scodanibbios work in two ways: by leaning on his music, and by continuing his work through the exploration of new forms and approaches, pushing the limits of double bass playing even further.

Due to the unpredictability of the players contributions, Gramss decided not to write long, continuous compositions, but instead to create a number of shorter combinable modules, which were connected after the recording was done.

The second part of the album is a collection of the most personal solo contributions  in these 11 pieces the players share their individual, personal connection to Scodanibbios work and show the wide scope of their musicality. The album ends with a treat  a bonus track Virtù, unpublished before. The track is a live recording of a duo by Stefano Scodanibbio and Sebastian Gramss from the Altstadtherbst Festival in Düsseldorf in 2008. This piece ties the whole album together and lets us enjoy Scodanibbios playing with the creator of 'Thinking of '.