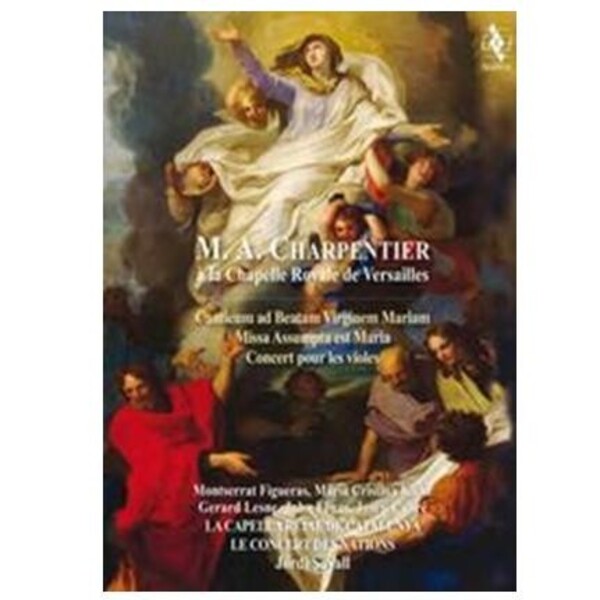 Marc-Antoine Charpentier at the Royal Chapel in Versailles

"To celebrate the 25th anniversary of the foundation of Le Concert des Nations by Montserrat Figueras and myself in 1989, we are now delighted to be able to release on the Alia Vox label an SACD version of Charpentiers 'Canticum ad Beatam Virginem Mariam' in what was the ensembles first recording.

This re-release is accompanied by a DVD of the recording of the concert given on 9th October, 2004, at the Royal Chapel at Versailles, and a second SACD featuring the live recording of 'Missa Assumpta est Maria' at that concert, as well as the instrumental interlude 'Nuit' taken from the 'Pastorale In nativitatem Domini canticum' and the new recording of the 'Concert pour quatre parties de Violes' at the collegiate church of Cardona on 7th May, 2013.

This is also an opportunity for us to pay homage to one of the greatest musicians of his generation on the occasion of the 310th anniversary of his death. Let us not forget that, together with Purcell in England, Charpentier brought about the transition from modality to tonality, enriching his works with poignant chromaticism, false relations and dissonances, which more often than not arose from that very conflict between tonality and modality.

Thus, the genius of Charpentier retains its relevance and eloquence today, thanks to his highly individual way of incorporating certain transalpine influences into the French tradition; all this, together with his profound spirituality, makes his music a perfect example of the goûts réunis. - Jordi Savall, Seoul, 29th April, 2014