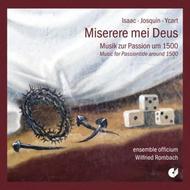 Leonardo da Vinci, Heinrich Isaac and Josquin des Prez were contemporaries. Leonardo's reknown amongst his contemporaries was based as much on his musical abilities as those in any other field and he is known to have been familiar with the compositions of Josquin and Isaac.

While Josquin was to continue to be hailed as the Michelangelo of music for centuries after his death, before succumbing to the same lapse into obscurity as Isaac, prosperity has been kinder to Leonardo. Perhaps if Leonardo's 'Treatise on Music' - referred to in his writings but lost - had survived, maybe the revival of the reputations of his musical contemporaries might have happened sooner, for this was an age in which music flourished as much as painting. The polyphonic complexity of music reached a zenith in this age that has never since been equalled.

Heinrich Isaac's 'Choralis Constantinus' is one of the greats of Renaissance polyphony. The small segment included on this disk is enough to make one crave a boxed set of the whole. The motet 'Miserere mei Deus' by Josquin des Prez is one of his most expressive, and the 'Lamentationes' by the nearly unknown composer Bernhard Ycart demonstrates once again that we've probably lost more splendid music than we've saved.

[Previously available on Christophorus c.2002 with the title 'Lamentatio']