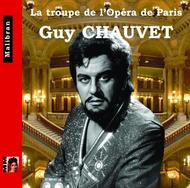 Guy Chauvet was born on 2nd of October 1933 in Montluçon, but brought up in Tarbes. It was in this town that Chauvets voice was first discovered during a local radio talent show.

He won all the major competitions - in the Cannes Tenors competition in 1954 he was the youngest of the winners alongside Alain Vanzo, Gustave Botiaux, Tony Poncet and Roger Gardes; in 1955, he won the international competition at Toulouse; in 1958 he won the 'Voix dOr' at Luchon. These successes persuaded the Paris Opera to engage him, but with the idea of carefully managing, directing and refining his development.

He finally achieved a resounding success with the public in the role of Arturo in 'Lucia di Lammermoor'. This launched his career, and from this time there were only major roles for him, such as Faust in 'La Damnation de Faust', Dimitri in 'Boris Godounov', Florestan in 'Fidelio', Le Roi David and Mario in 'Tosca'.

These recordings have all come from the personal collection of Guy Chauvet. For this reason, we do not have all dates and locations of the tracks, but it provides a fascinating insight into this remarkable voice.