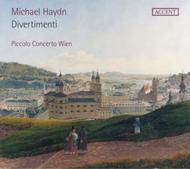 Joseph Haydn's younger brother Michael Haydn (1737-1806) was also a highly esteemed composer during his lifetime - his works were admired by Schubert and Mozart. The life journeys of the two Haydns ran almost parallel to each other during their early years: both were choirboys at St Stephan's Cathedral in Vienna and were educated by the kapellmeister there, Georg Reutter The Younger.

After six years in Großwardein with Bishop Adam Patacsics, Michael Haydn was taken by Archbishop Sigismund von Schrattenbach to Salzburg, where he was appointed court composer in 1763. Michael Haydn worked in Salzburg for 43 years, composing numerous sacred and secular works. These were not printed, however, which is the reason why they are not as well known as those of his famous brother.

The Divertimenti recorded here are written for either a quartet or a trio  but not, however, in the later customary ensemble of one or two violins, viola and violoncello. Their varied instrumental colours give them a special attraction - alongside the string instruments just named, one can hear the cor anglais, oboe, violoncello piccolo and violone in variable combinations.