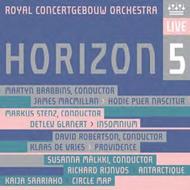 This fifth release in the Royal Concertgebouw Orchestras 'Horizon' Series features an exciting mix of recently written works, beginning with 'Hodie per nascitur', an orchestration by James MacMillan of an anonymous 14th Century antiphon. Martyn Brabbins conducts the RCO and the Huelgas Ensemble is led by Paul van Nevel.

Klaas de Vries' 'Providence'  inspired by Resnais' 1977 movie  is about recollection, prediction, expectation and fulfillment. It is conducted by David Robertson.