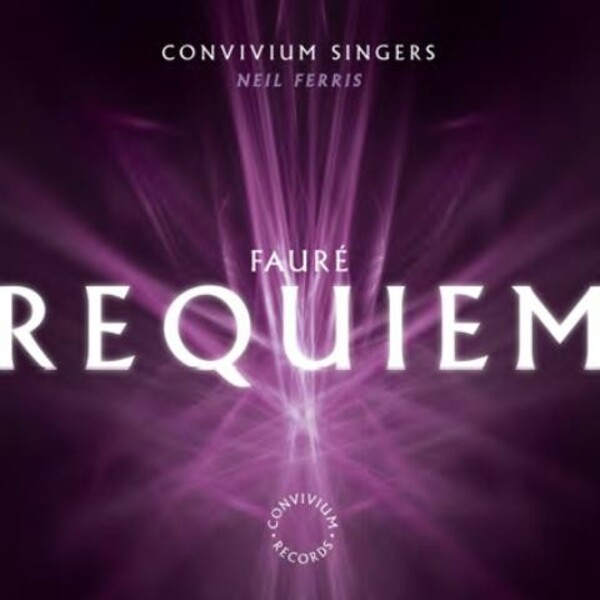 This new arrangement of Fauré's Requiem, for string quintet and organ by Michael Higgins, was first performed on Remembrance Sunday in 2007 in the intimate setting of the choir stalls at St Johns Church, Wimbledon. The use of a small number of singers (similar to the 20 or so in Faurés choir at the Madeleine), and the chamber music quality of the strings, means that unique colours and textures are created which breathe new life into an otherwise familiar but continually evolving work.

Faurés 'Ave verum corpus' is written in a style that recalls his Requiem  simple and emotional. The text, attributed to Pope Innocent VI, is a prayer for the Feast of Corpus Christi and in just five lines covers the Incarnation, the Passion, the Eucharist and the Last Judgement. The 'Cantique de Jean Racine' is an early work, winning first prize from lEcole de Musique Classique et Religieuse of Paris where he was a student of Camille Saint-Saëns. Scored originally with harmonium and string quartet accompaniment, but recorded here in a new arrangement for string quintet, one can hear rhythmic triplets contrasting with the steady declamation of Racines text.

Convivium Singers is an award winning, critically acclaimed choral ensemble, providing opportunities for young singers at the early stages of performing careers, as well as for talented musicians who have chosen not to pursue careers in music. The ensemble specialises in performing and recording sacred and secular music by living British composers. They were described as "an extraordinarily good choir to listen to" by BBC Radio 3s CD Review, with reference to the recently released (Naxos) disc of music by Jonathan Dove.

Convivium Singers have also delved into early music, and their CD of motets by Peter Philips (Convivium Records) received a five-star review in Choir & Organ.

Dove - The Passing of the Year