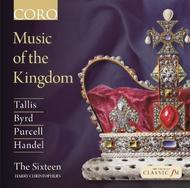 Music of the Kingdom

Let thy hand be strengthened, HWV259
Zadok the Priest, HWV258

I will always give thanks (Club Anthem)

» May her blest example chase
» May she to heaven late return

Be strong and of good courage

Let thy hand be strengthened, HWV259
Zadok the Priest, HWV258

I will always give thanks (Club Anthem)

» May her blest example chase
» May she to heaven late return

Be strong and of good courage

This new compilation from The Sixteen brings together some of the finest works written for, and in celebration of, Monarchs and the Kingdom. From Turges in the 1400s to Britten in the 20th century, whether for magnificent state occasions or private devotion, the Kings and Queens of Great Britain have inspired and patronized some of our finest and most enduring music.

Included on this disc are two of Handels glorious Coronation Anthems written for the coronation of King George II, excerpts from Purcells music for Queen Mary, and the Sanctus from Robert Carvers sumptuous Missa Dum Sacrum Mysterium which may well have been sung at the coronation of James V.

Taking centre-stage, however, is Talliss dazzling Sing and glorify  the English setting of Spem in alium which was adapted for King James I to honour his son Henry, the newly-anointed Prince of Wales.

On display are centuries of superb compositions from the Coro catalogue of recordings made so far, with the exception of one specially recorded track: William Byrd's fabulous O Lord, make thy servant Elizabeth.