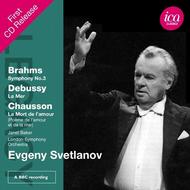 From 1970 onwards, Svetlanov started to conduct in the West and with the advent of perestroika in the late 1980s, many musicians, including Svetlanov, took up positions in Europe. He was a regular guest conductor in the UK  with the London Symphony Orchestra (becoming prinicipal guest in 1979), the Philharmonia and the BBC Symphony Orchestra  as well as in the Netherlands, France and Japan.

Svetlanovs repertoire was large (including his discography). In addition to the full range of Russian works, he was a masterly conductor of non-Russian composers of the late-Romantic era, including Bruckner, Elgar and Mahler, as well as Debussy and Brahms as demonstrated here. He died in 2002 shortly after conducting the BBCSO in a memorable account of Rachmaninovs cantata The Bells.

The performances of the Brahms and Debussy are recorded in brilliant stereo and have never been issued before.

The bonus consists of Janet Baker singing the final song from Chaussons Poème de lamour et de la mer - La Mort de lamour  Le Temps des lilas. This comes from the same concert and has been previously issued. In a review of this performance, The Times wrote of Janet Bakers lovely tone throughout a wide range and an equally beautiful shapeliness and continuity of line. Svetlanov was praised for achieving a refined orchestral blend and balance. The performance was said to have held a large audience spellbound.