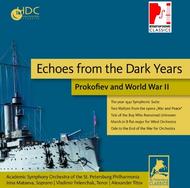 Echoes from the Dark Years

This compilation presents rarely recorded titles from Prokofiev's creative output. They all come from the era of World War II. The outbreak of war in 1941 stimulated soviet composers - symphonic music became one of the most important creative areas in those years of war.

Prokofiev's symphonic suite The Year 1941 was first performed in January 1943. The Ballade of the boy who remained unknown shows traits of propaganda and is the first recording for a CD release. These recordings with Alexander Titov conducting impress with their authenticity and historical understanding.

The conductor Aleksander Titov was born in 1954. He received his musical education at the Leningrad conservatory as a pianist, choir director and opera-symphony director, from such famed professors as Avenir Mikhailov and Ilya Musin. His concert activities at the finest Leningrad halls began in the mid 1970s. Titov participated in international projects as an assistant to Mstislav Rostropovich and Gennady Rozhdestvensky. He is especially famous as a wonderful interpreter of 20th century music, as well as of many rarely-performed and forgotten compositions.