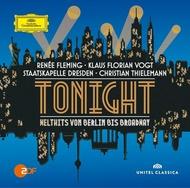 » The Loreley
Strike up the Band

» The Loreley
Strike up the Band

The Staatskapelle Dresdens New Years Eve concert has become a much-loved fixture in the musical calendar. This years event, starring Christian Thielemann, Renée Fleming and Klaus Florian Vogt, is being released on both CD and DVD.

Steeped in tradition, the Dresden Semperoper has welcomed many prestigious figures to its podium, from Carl Maria von Weber and Richard Wagner to the current Principal Conductor of the Staatskapelle Dresden, Christian Thielemann  a forward-thinking musician, but one who also has a healthy respect for the past.

The Semperopers New Years Eve concert is a highlight of the holiday season and the perfect way for music-lovers to see out the Old Year and welcome the New. Broadcast live on ZDF in Germany and relayed by Unitel Classica to 27 different countries, it has become a much-loved part of the seasonal festivities, its popularity due in large part to the fact that Thielemann and his orchestra deliver a finely balanced mix of the festive and the nostalgic, with touches of downbeat Weltschmerz amid the whirling waltzes.

This years programme, entitled 'Tonight', will take the audience on a dazzling journey from Berlin to Broadway, showcasing all the dynamism and drama of twentieth-century musical theatre: from kings of operetta Paul Abraham, Robert Stolz and Paul Lincke to masters of the musical Frederick Loewe, George Gershwin and Leonard Bernstein.

Thielemann will steer a course between operetta classics such as Two Hearts in Waltz Time and Flower of Hawaii, and Broadway hits such as 'Maria' and 'Tonight' from West Side Story, stopping off along the way to perform numbers from less well-known works such as Gershwins Strike Up The Band, a satire in which the US declares war on Switzerland over the price of cheese!

Sharing the stage with Thielemann this year are two of the greatest singers of our time, soprano Renée Fleming and tenor Klaus Florian Vogt  ideal choices as far as the conductor is concerned. Its wonderful to celebrate New Years Eve with friends, he says. Ive worked with both of them many times and its always a delight, so I couldnt ask for better company on the last night of the year.

The great thing about these operettas and musicals is that as well as the snappy rhythms and numbers in three-quarter time, there are always serious undertones too, says Thielemann. So yes, theyre perfect for a New Years Eve celebration, but because theyve been part of the classical repertoire for so long now, they also give us a kind of timeless insight into human hearts and souls.

George Gershwin
10. The Loreley (from the musical Pardon My English)
Renée Fleming  Sächsischer Staatsopernchor
11. Strike up the Band: Overture

Frederick Loewe
13. I Could Have Danced All Night (from the musical My Fair Lady)
Renée Fleming