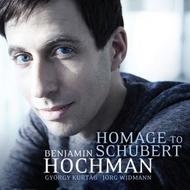 On Homage to Schubert, Benjamin Hochman performs two contrasting Schubert Sonatas - the delicate and somewhat modest D664 in A major, and the brilliant and bold D850 in D major, alongside modern-day tributes to the composer by György Kurtág, whose work lends its name to the recording's title, and the world-premiere recording of Jörg Widmanns Idyll and Abyss: Six Schubert Reminiscences, which conjures a wide range of complex, volatile and mercurial emotions worthy of their namesake.

Winner of 2011s prestigious Avery Fisher Career Grant, Hochman has been described by the New York Times as a gifted, fast-rising artist. Following a successful 2006 debut at the Metropolitan Museum of Art, he has gone on to perform with the New York Philharmonic, American Symphony Orchestra, Israel Philharmonic at Carnegie Hall, and the Chicago, Pittsburgh, Cincinnati, Houston, Seattle, San Francisco, Vancouver, New Jersey and Portland Symphonies. A graduate of the Curtis Institute of Music and the Mannes College of Music, his festival performances include Marlboro, Ravinia, Caramoor, Santa Fe, Bard, Gilmore, Vail and Vancouver. His performances have been broadcast on National Public Radios Young Artist Showcase and Performance Today, WNETs Sunday Arts, and New Yorks WQXR.