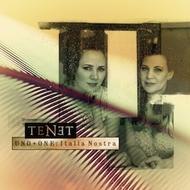 UNO + ONE: Italia Nostra reflects Tenets hallmark qualities of innovative programming, virtuosic singing, and a particular command of repertoire from the Renaissance and Baroque eras. At the heart of UNO + ONE are the canzonette, arie and scherzi by Monteverdi, a composer with whom TENET is indelibly associated due to their groundbreaking annual performances of the towering Vespers of 1610, which they inaugurated in the works 400th anniversary year of 2010.

Sopranos Jolle Greenleaf and Molly Quinn, together with their instrumental colleagues - the crème de la crème of the New York early music scene - offer inspired and idiomatic performances of these sublime gems alongside works by contemporary Italian masters.