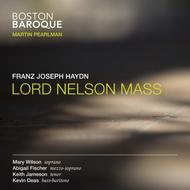 Released to coincide with Boston Baroques 40th Anniversary Season, Haydn: Lord Nelson Mass is the anticipated follow up to Haydn: The Creation which launched the orchestras partnership with Linn in 2012.

The ensembles concerts of the Lord Nelson Mass have received rave reviews, with the Boston Globe praising the ensembles magnificent performance.

Creation soloists Keith Jameson (tenor) and Kevin Deas (bass-baritone) return for this recording, having won acclaim for their previous performances. They are joined by Mary Wilson (soprano) and Abigail Fischer (mezzo-soprano).

The Mass is partnered on this recording by Symphony No.102 - the most powerful, brilliant and interesting of Haydn's London symphonies, giving centre stage to the ensembles talented musicians.

Founded in 1973 by Martin Pearlman, Boston Baroque is already familiar to an international audience with its critically acclaimed catalogue of recordings. The three-time Grammy-nominated ensemble is widely regarded as one of the worlds premier period instruments bands (Fanfare).

Boston Baroque's recordings - of which Fanfare magazine wrote each one is an incomparable gem - are heard by millions on classical radio stations in North America and Europe.

A magnificent performance, played with astonishing precision and led with authority by Martin Pearlman. The four soloists sang beautifully as individuals and were perfectly matched as a quartet. The trumpets and timpani outdid themselves, as did the chorus. - Boston Globe