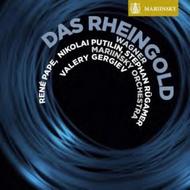 The Mariinsky label releases the highly anticipated second instalment of Richard Wagners 'Der Ring des Nibelungen' conducted by Valery Gergiev. Recorded in the sumptuous acoustic of the Mariinsky Concert Hall, 'Das Rheingold' is led by René Pape in the role of Wotan. Pape is ably supported by an international Wagnerian cast, and "Gergievs absolute mastery of this orchestra" (Wagner News) is in evidence once again in a tremendously dramatic performance.

'Der Ring des Nibelungen' was the pinnacle of Richard Wagners long and turbulent career and without question one of the greatest achievements in opera. Wagner wanted to create the perfect synthesis of music and drama and assumed total creative control of the project which was to take him 26 years to complete, with frequent interruptions. He introduced numerous innovations, not least the sheer scale of the project  typically a complete performance will last in excess of 15 hours, spread over four evenings. No other opera matches the scale or ambition of the 'Ring'.

The Mariinsky Theatre has close connections with Wagner and his music. The composer conducted at the theatre and was even offered the post of Music Director. It is also believed to be the first place where any of the music from the Ring was performed.

Since Valery Gergiev became Music Director of the Mariinsky, Wagners music has once again become a core part of the theatres repertoire, both in St Petersburg and on tour.