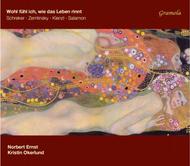 I feel how life is trickling away  On a quest between unrequited love, passion and apocalypse, here you can hear sometimes despairing, pausing, but also conciliatory and optimistic songs from musical life in Vienna at the turn of the 19th and 20th centuries.

The tenor Norbert Ernst and pianist Kristin Okerlund present selected songs by the Austrian composers Franz Schreker, Alexander Zemlinsky and Wilhelm Kienzl. The Wang Valley Songs by the Wiener Neustadt composer Michael Salamon, dedicated to the interpreter Ernst in 2010, were written after seven poems from the cycle The Wang Valley by the greatest Chinese poet of the Tang Dynasty, Wang Wei (around 701761).

Norbert Ernst studied singing education and singing performance with Gerd Fussi at the Josef Matthias Hauer Conservatoire in Wiener Neustadt and song and oratorio with Robert Holl and Charles Spencer at the University of Music and the Performing Arts in Vienna, and at master classes held by Walter Berry and Kurt Equiluz. After his first commitment at the German Opera on the Rhine from 2002 to 2005, there followed guest appearances at major European opera houses, such as the Bavarian State Opera in Munich, the Vienna State Opera, the Gran Teatre del Liceu in Barcelona, the Grand Théâtre de Geneve, in Berlin, Paris, Monte Carlo and Amsterdam under conductors such as Franz Welser-Möst, Christian Thielemann, Sebastian Weigle, Bertrand de Billy, Ingo Metzmacher, Pierre Boulez or Ivor Bolton.