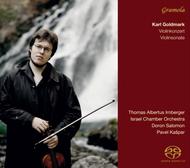 After two successful productions (violin concertos by Gál and Mendelssohn), the collaboration between Thomas Albertus Irnberger and the Israel Chamber Orchestra now leads to a third CD, with works by Karl Goldmark - the long-neglected Violin Concerto in A minor op.28 by the Austro-Hungarian composer of Jewish descent conducted by Doron Salomon and his Violin Sonata op.25 with Pavel Kaspar on the piano. The artistic sovereignty of the performance disguises the fact that due to the permanently delicate situation in the Near East, the recording in Israel could only be made under very difficult conditions and with a great deal of courage.

Thomas Albertus Irnberger, born in Salzburg, began violin lessons at the Mozarteum in Salzburg, moved to Prof Josef Sabaini in Linz and was taught by Ivry Gitlis in Paris. Further teachers included Mauricio Fuks, Yair Kless, Alberto Lysy, Igor Oistrach, Dmitry Sitkovetsky and Grigory Zhislin. Many awards, performances at international festivals and co-operations and recordings with musicians such as Jörg Demus, Evgueni Sinaiski or Paul Badura-Skoda, as well as with the Israel Chamber Orchestra conducted by Roberto Paternostro and the orchestra Spirit of Europe under its principal conductor Martin Sieghart, emphasise the young Salzburgers musical skills.

The ICO's repertoire ranges from early baroque to contemporary music. The Orchestra places utmost importance on attracting the young generation. Its Family Series has been enthusiastically acclaimed by young audiences and professional music critics alike. CD recordings have been released with Chandos, Musicmasters, Koch, Teldec and Gramola.