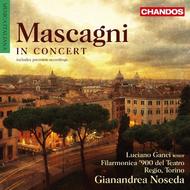 The Italian composer Pietro Mascagni was best known for his output in the operatic genre. However, that is not to say that he did not diversify into other genres. On this disc, which is part of our on-going series of Italian music, a selection of his works for the concert hall receives idiomatic performances by Gianandrea Noseda and the Filarmonica 900 del Teatro Regio Torino, with the tenor Luciano Ganci.

Mascagni devoted his earliest efforts at composition to sacred works. His Padre nostro won first prize at the Esposizione Musicale di Milano in 1881, and was praised in the Livorno press for being truly melodic and singer-friendly. Years later, in 1894, Mascagni capitalised on the outstanding success of his operatic masterpiece Cavalleria rusticana by adapting the famous Intermezzo as Ave Maria, thus adding yet another gem to his output of sacred music.

The symphonic work Danza esotica was intended for the fairly large orchestra of the Philharmonic Society that he had founded in the town of Cerignola, Puglia. It received its premiere performance by the composer himself in March 1891. While still in Puglia, Mascagni wrote a waltz for string quartet. Mein erster Walzer is modelled along the lines of a Viennese waltz, but featuring rather bucolic melodic turns, and imbued with a feeling of the open air.

Concerning La gavotta delle bambole, Mascagni wrote: I have completed this little piece, which really is a tiny little piece, but I believe it has turned out to be a charming little thing that could meet with popular success. The following year, in 1901, the composer wrote incidental music for the first production, in London, of The Eternal City, set in Rome during the last years of the century. This was a time when Italy was wracked by strong political and socio-economic tension. But in spite of the nature of the play itself, which is brimming with intrigue and conspiracy theories, Mascagni in his incidental music chose to concentrate solely on a more romantic approach, by depicting the love between the two protagonists.

Visione lirica is one of Mascagnis much later works. This small-scale symphonic poem of 1921 is written on the lines of Liszt and Richard Strauss, and inspired by the statue of St Teresa, carved by Bernini and situated in the church of Santa Maria della Vittoria in Rome. The work combines moments of ecstasy with an undertone of meditation and chastity.

The last addition by Mascagni to his orchestral uvre was Lapoteosi della cicogna, written for inclusion in the ballet Fiori del Brabante (premiered in February 1930) and characterised by great subtlety of orchestration, the presence of Debussy-like episodes, and Tristanesque harmonies.