The Art of David Tudor

David Tudor's (1926-1996) identity morphed seamlessly from interpreter of mainly acoustic music to composer-performer of predominately electronic music over a period of about ten years, from the mid-1950s to the mid-1960s.

This set of seven CDs, the first truly comprehensive survey of Tudor's work as a composer, goes beyond any previous attempt to document that process of transformation. It captures his touch and sensitivity and offers an expansive, previously unavailable view onto more than three decades of Tudor's astonishingly original work as an electronic musician. It neatly describes the arc of his career, from his first composition, Bandoneon ! (A Combine), through the fully-realized works of his long collaboration with the Merce Cunningham Dance Company. Six works that were issued in excerpted form in Music for Merce (1952-2009) are issued here complete.
Other highlights include the live soundscapes for the Pepsi Pavilion at the 1970 Osaka World Expo, the marvelous simultaneous performance with John Cage of Mesostics Re Merce Cunningham/Untitled, and two extended binaural recordings of Rainforest IV with Composers Inside Electronics, the best recorded documents of this signature work.
While Cage has finally more or less received his due, Tudor's own accomplishments have been somewhat overshadowed and are ripe for a proper re-evaluation. It is our hope that the release of this set will prompt a thorough reconsideration of his seminal achievements. 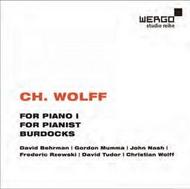 Wolff - For Piano 1, For Pianist, Burdocks 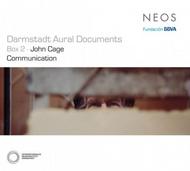 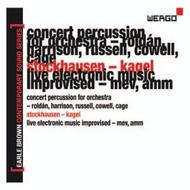