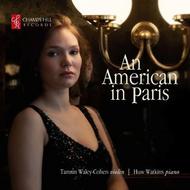 An American in Paris
Porgy and Bess

Decoration Day for violin and piano

An American in Paris
Porgy and Bess

Decoration Day for violin and piano

Described as The most exceptionally gifted young violinist I have ever encountered by Ruggiero Ricci, Tamsin Waley-Cohen explores her European/American heritage in her debut disc, 'An American in Paris'.

Tamsin says of this project: 'Song is one of the primary connections between all the works on this disc; folk songs, cafe songs, blues songs, traditional songs. I grew up with many of them; the Ives and the Gershwin, and even the Blues in the Ravel, from my American Mother. Some, such as the cafe songs of the Poulenc, are part of my European heritage. The juxtaposition of the beauty of these songs with the sardonic humour and the macabre, which in particular inhabit both the Ives and the Poulenc, adds power and poignancy to the content of these works.'

Poulencs Violin Sonata, written while the composer was coming to terms with life under Nazi occupation, is dedicated to the memory of Federico Garcia Lorca, the poet and playwright who was murdered by opposition forces in the Spanish Civil War in 1936.

Ravels Sonata, composed between 1923 and 1927, contains long periods of refined, rather reserved music punctuated by moments of full-blooded passion and although influenced by blues is far from mere pastiche.

Decoration Day was first composed by Charles Ives in 1912 woven with themes from part-fictional, part-autobiographical recollection of personal childhood memories. The piece was reconstructed by the pianist and scholar John Kirkpatrick from surviving sketches after 1919.

George Gershwin visited Paris in 1928 and met, among other composers, Ravel, Poulenc, Prokofiev and Berg. Although Porgy and Bess (1935) attracted mixed reviews, songs such as the lullaby Summertime, It aint necessarily so and the heartbreaking My mans gone now became instant hits. The arrangement by Heifetz heard here of half a dozen numbers from Porgy and Bess is testament to the high esteem in which the legendary violinist held his music.

Tamsin Waley-Cohen was born in London in 1986. She is currently associate artist with Orchestra of the Swan and performs as a soloist with others, including the Royal Philharmonic Orchestra, Orchestra of St John's, London Concert Orchestra. Since 2007 she has played the 1721 ex-Fenyves Stradivarius violin.