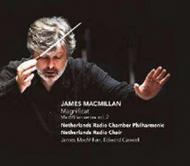 James MacMillan, one of todays most successful living composers, is also internationally active as a conductor, becoming Guest Conductor of the Netherlands Radio Chamber Philharmonic in 2010. This second volume, in a series of recordings from Challenge Classics featuring MacMillan conducting his own music, focuses mostly on choral music. It includes the world premiere recording of the antiphon Ó, as well as the Magnificat and Nunc Dimittis, all sung by the Netherlands Radio Choir, and the substantial orchestral piece Tryst.

The disc opens with the premiere recording of MacMillans Ó, an antiphon for choir, trumpet and strings that incorporates a text in English (O Radiant Dawn) used at vespers on 21 December during the last seven days of the season of Advent.

Magnificat was commissioned by the BBC for the first Choral Evensong of the new Millennium, at Wells Cathedral. The choral writing is simple and homophonic, each phrase punctuated by an introspective instrumental echo.

The Nunc Dimittis was commissioned by Winchester Cathedral and is based on similar material. Some of the climactic music from the Magnificat is recalled for the final Amen. Both works exist in versions for choir and organ, and, as here, for choir and orchestra.

Separating Ó and the two other liturgical pieces is Tryst, commissioned by the Scottish Chamber Orchestra and premiered by them in 1989. Its emotional core is a simple melody which MacMillan had previously employed in his setting of William Soutars love poem written in broad Scots, The Tryst, and which also cropped up in several of his other compositions.

James MacMillans musical language is flooded with influences from his Scottish heritage, Catholic faith, social conscience, and a close connection with Celtic folk music blended with influences from Far Eastern, Scandinavian and Eastern European music. MacMillan first became internationally recognised after the extraordinary success of The Confession of Isobel Gowdie at the BBC Proms in 1990.