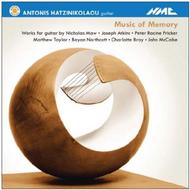 Music of Memory: Works for Guitar

A Greek guitarist offering an all-British recital? Not an obvious link but, Antonis Hatzinikolaou tells us, long before he arrived in London he was aware of the impressive range of modern British guitar music  in particular the magnificent list of pieces commissioned by Julian Bream. He even based his Masters degree concert project on Benjamin's Brittens 'Nocturnal'.

The disc takes its title from another major guitar work of the 20th century, Nicholas Maw's Music of Memory  an intricate set of variations on a theme from Mendelssohn's String Quartet in A minor. It is coupled with premiere recordings of Maw's Little Suite for Guitar, Peter Racine Fricker's dramatic, Spanish-inflected Paseo  commissioned by Julian Bream but never recorded, and works by Bayan Northcott, John McCabe and Joseph Atkins.

Finally, the recording features 2 works commissioned by Antonis from Charlotte Bray and Matthew Taylor, with support from the Britten-Pears Foundation.

Born in Greece in 1980, Antonis Hatzinikolaou graduated from Philippos Nakas Conservatory in Athens, proceeding to the Royal Academy of Music in London, where he gained his Postgraduate Diploma in Performance, under the tutelage of Michael Lewin, Timothy Walker and John Mills.

He was awarded the Reginald Thatcher Award for General Excellence, and the Honorary Dip RAM  the highest performance award conferred by the Academy. He has also won many awards, including the prestigious Julian Bream Prize in 2006.