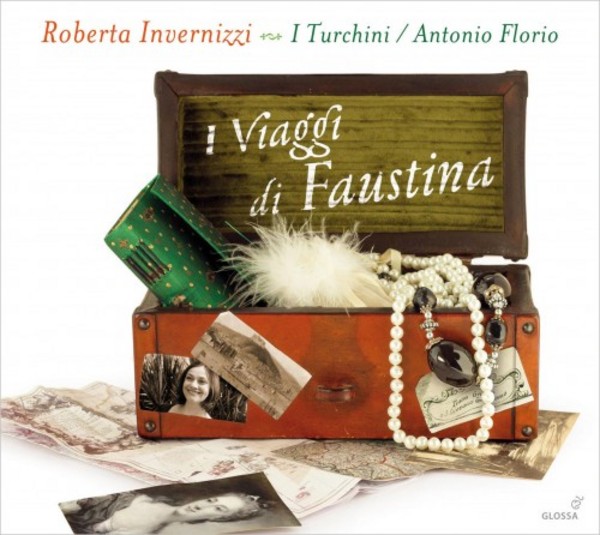 With 'I Viaggi di Faustina' Glossa launches a new collection focusing on famous Italian singers from the 17th and 18th centuries, whose travels [viaggi] bear witness to the intense level of artistic activity then taking place in the major cities of Europe.

Faustina Bordoni, the brilliant diva with whom we begin this series, pursued her career mainly in Naples (the principal focus of this CD) and Venice, but also in cities such as Bologna, Parma, Dresden and London. These were cities hosting  with great success  operas by Johann Adolph Hasse (Bordonis husband), Nicola Porpora, Leonardo Vinci, Francesco Mancini and Domenico Sarro. Most of these composers are represented on this first selection of wonderful arias.

The artist chosen to reincarnate Faustina Bordoni is considered by many to be the leading soprano in Baroque music today: Roberta Invernizzi. In repertoire that fits like a glove, Invernizzi displays her renowned virtuosity along with a shared musical sensitivity with Antonio Florio and I Turchini.

This is Roberta Invernizzis second release on Glossa as the main protagonist, the first being her outstanding and very highly-appreciated album of Vivaldi arias. Devised by the scholar Dinko Fabris and conductor Antonio Florio, with further musicological advice coming from Juan José Carreras and Giulia Veneziano, this new collection also gives a central importance to the texts and to the iconography which put each recording in context; in this way endeavouring to create the most complete and stimulating vision possible of the conditions surrounding these inimitable artists.

Glossa's new series of recordings, entitled 'Sirene' and themed around the musical travels of famous baroque singers, gets off to a cracking start with this disc, focusing on one of the most celebrated divas from the late baroque period, the Venetian-born Faustina Bordoni (170081). Today, Faustina's name is best known to English-speaking audiences for her involvement with Handel's London operatic ventures in the late 1720s, including a very public spat with her musical rival, Francesca Cuzzoni. Yet for most of her long career she was active in Venice, Naples, and (following her celebrity marriage to the composer Johann Adolph Hasse) Dresden.

This recording concentrates mainly on Faustina's activities in Naples, from Bononcini's Rosiclea in Dania (1721) to Leonardo Vinci's Catone in Utica (1732), and it's a sheer delight from start to finish. Over the past few decades, the emergence of vibrant and exceptionally polished renaissance and baroque ensembles in Italy has been one of early music's great success stories. And Glossa could hardly have done better than turn to Roberta Invernizzi, one of the finest early music sopranos around, especially when she is partnered by Neapolitan specialists I Turchini under their director Antonio Florio.

Although a soprano, Invernizzi proves an ideal choice for Faustina's mezzo repertoire, for along with clarity and an enviable agility, her voice also has a warmth and substance to it not always encountered in modern-day baroque singing. In the da capo arias Invernizzi, like Faustina before her, is restrained in the use of decoration during the initial exposition of the main material, but dazzlingly lavish on its return. She rises magnificently to the quasi-instrumental demands of Porpora's 'Son prigionera d'amore' (from his opera Poro, Turin, 1731), and is just as impressive in a fiery performance of the defiant 'Scendi da questo soglio' from Vinci's Il Trionfo di Camilla (Parma, 1725). Yet the gentler side of Invernizzi's art is also heard to good effect, as in the engaging but expressively demanding 'Canta e dì, caro usignolo' from Mancini's Traiano (Naples, 1723), with its accompaniment including sweet-toned recorders, and even more so he Vinci's deeply touching 'Un guardo solo ancor', a beautifully warm and resonant performance.

Invernizzi's expressive engagement with the texts as well as the music is everywhere evident: try Vinci's 'Confusa, smarrita' [Confused, bewildered] from Catone in Utica, with its dramatic pauses, or the contrast between sunny poise and disappointment in the two sections of Porpora's 'Raggio amico di speranza' (once again, some truly marvellous da capo ornamentation).

Other highlights include a meltingly tender account of the heart-stopping 'Tortora, che il suo bene' from one of Faustina's greatest triumphs, Sarro's Partenope (Naples, 1722), and 'Ecco mi parto, addio!' from Vinci's cantata Parto ma con qual core, the latter dedicated to Faustina on her departure from Naples for Florence in the summer of 1723. Both these works make reference to the founding myth of Naples, a city which had taken Faustina  dubbed the 'new siren'  so much to its heart.

The musicians of I Turchi provide winning accompaniments throughout, not least a sparklingly alert rendition of Vinci's 'Non ti minaccio sdegno'. And they have further opportunities to shine in two sinfonias by Porpora and Mancini, as well as a short concerto for recorder and strings by Sarro with excellent solo playing from Tommaso Rossi.

The presentation is attractive, with plenty of contemporary portraits and illustrations (many in colour), full notes notes and texts in Italian, English, French and German, all backed up by thorough and imaginative scholarship. This recording bodes extremely well for what should be a splendid series of discs.