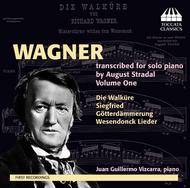 The Czech-born pianist and writer August Stradal (18601930)  a student of Bruckner and disciple of Liszt  was one of the more prolific transcribers of the nineteenth and earlier twentieth centuries. He produced a vast quantity of piano music, including Liszts orchestral works, most of the Bruckner symphonies, a good deal of the Baroque (not least a huge amount of Bach) and much more. These transcriptions are phenomenally difficult to play.

This is the first in a series of recordings presenting his Wagner transcriptions, cast in the best barnstorming virtuoso tradition. They are an unusual way of marking the Wagner bicentenary in 2013.

Juan Guillermo Vizcarra is one of the leading Peruvian pianists of his generation, whose performances have been heard far beyond his native land. He has received numerous honours in international competitions. This Wagner CD is his first recording; there will be two more in the series.