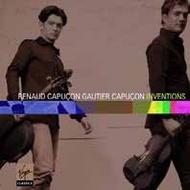 
As a sequel to their first volume (Face à Face) of works for violin and cello, brothers Renaud and Gautier perform virtuoso and rare works by composers ranging from Bach to other composers of the 20th century. A unique disc of works rarely performed, and even created, here on disc. Their sister Aude is at the piano on the last track (Kriesler).

The Bach works here performed are transcriptions by Frederick Neumann for violin and cello (as Mozart did for string trios) of inventions from the Two-part Inventions and the Prelude in D from the first book of the Well-tempered Clavier and the dances in the second of the English Suites. Born in 1973, Karol Beffa, dedicated his two Masques for violin and cello, to Renaud and Gautier Capuçon. Gideon Klein, composed his Duo for violin and cello in 1939, 2 years before being sent to concentration camp, where he died, tragically ending a career full of promise. Hanns Eisler, was a pupil of Schoenberg, a composer for the theatre and for cinema, and a fellow-traveller of Brecht. Considered one of the most accomplished pieces in his immense output is the Duo for violin and cello, Op.7, composed in 1924. Bela Bartóks Hungarian Folksongs, sometimes plaintive but always full of life, lose nothing of their picturesque nature in transcription for violin and cello; while respecting tradition. Bohuslav Martinů wrote two duos for violin and cello, the second of which, in D, was finished in 1958, a year before his death. Fritz Kreisler: composer, excellent pianist and violin virtuoso, this famously generous artist recorded his own Marche miniature viennoise in 1945. In this recording, Aude Capuçon, pianist, accompanies her brothers in this lithe and graceful work.