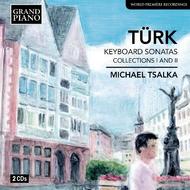 Best known for his influential Klavierschule, Daniel Gottlieb Türks inventive and expressively wide ranging sonatas, of which there are 48, grew from the expressive potential of the genre shown by North German composers such as CPE Bach.

The five different instruments used in this recording reflect the diversity of those available in Türks day, his detailed dynamic markings exemplifying the nuances of style of which they are capable.

Michael Tsalka has won numerous prizes and awards throughout his career. A versatile musician, he performs solo and chamber music repertoire from the Early Baroque to Contemporary on the modern piano, harpsichord, fortepiano, clavichord, square piano and chamber organ.

Michael Tsalka performs throughout Europe, the Americas and Asia, having appeared at the Boston Early Music Festival, the Forbidden City in Beijing, the Mozart Fest in Austin, the Osaka Festival in Japan, the Hermitage Festival in St Petersburg, and the Early Keyboard Series in Buenos Aires, amongst others. Tsalka holds a masters degree in chamber music/accompanying, a masters degree in harpsichord performance and a doctorate in piano performance.