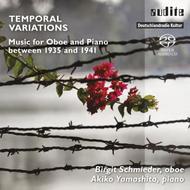 Temporal Variations: Music for Oboe and Piano between 1935 and 1941

Suite for oboe and piano, op.17

Suite for oboe and piano, op.17

This collection of duos for oboe (specifically cor anglais) and piano by Benjamin Britten, Pavel Haas, Paul Hindemith and Nikos Skalkottas are not only interrelated by the period in which they arose  the years 1935-1941  but also as haunting documents of musical paths through an increasingly gloomy time.

Hindemiths sonatas for English horn and piano, part of his larger sonata oeuvre, reflect internalisation and technical dispassion before and during his emigration. Pavel Haas suite is a subtle protest against the annexation of Czechoslovakia by Nazi Germany. Skalkottas concertino is part of a unique oeuvre that the student of Schoenberg wrote in artistic isolation and under desolate external circumstances in his home country. In both ingenious works of the young Benjamin Britten, a deep unease with the political conditions of the pre-war period is perceptible beneath a surface of virtuosic luster. An enormous contribution to the small repertoire of 20th century oboe literature, these works also present great musical and artistic challenges to the performers.
Birgit Schmieder is a winner of competitions such as the Deutscher Hochschulwettbewerb and the Deutscher Musikwettbewerb. She has performed as a soloist and chamber musician with several ensembles specializing in early and new music in Germany and beyond. As a soloist, she has appeared with ensembles such as the Deutsche Bachsolisten, the Berliner Symphoniker and the Deutsches Kammerorchester. Concert tours have led her to Italy (Venice Biennale), Poland (Warsaw Autumn), Israel, China and Korea.

Akiko Yamashita has appeared extensively as a soloist, chamber musician and accompanist. Her concert activities have taken her throughout Germany, Switzerland and the Netherlands as well as to Austria, Italy, Ireland, Russia, Japan and the USA. She has appeared at festivals such as the Berliner Festwochen, the Berlin new music festivals Maerzmusik and Ultraschall, Steirischer Herbst in Graz, the Venice Biennale and the Festival Milano Musica. She appears regularly as a soloist with orchestras including the Stuttgarter Kammerorchester under Dennis Russell Davies.