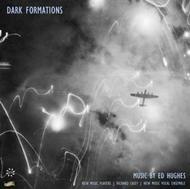 The Quartet is a single movement for clarinet, violin, cello and piano. The Chamber Concerto started life as a single movement for an ensemble of thirteen instruments. Hughes later re-scored it for seven players and added three more movements. The inclusion of the horn and bass clarinet, which often form an earthy duet within the texture, gives an extra kind of punch to the work.

Dark Formations is the first result of a collaboration between David Chandler, Professor of Photography at the University of Plymouth, and Ed Hughes. Conceived as part of a projected larger project, this work reflects on the relentlessly destructive forces of war, through sound and music and through rarely seen photographs from the archives of the Imperial War Museum of the intensive bombing campaign waged by the Allies against German cities during the final years of World War II. Dark Formations is an ongoing audiovisual project by David Chandler and Ed Hughes.

Strike! was completed in 2006 as a study for a complete scoring of Eisensteins film Strike, which followed in 2007. The movement was broadcast on BBC Radio 3s Hear and Now programme in 2008. The Sextet is in three movements and is scored for flute, clarinet, violin, cello, marimba/vibraphone and piano.

In 2001 Hughes was commissioned by the Bath International Music Festival to create a new accompaniment to Joris Ivenss 1929 silent film of Amsterdam, Regen (Rain). The music was performed by the New Music Players in a concert which also included Eislers Vierzehn Arten den Regen zu beschreiben (Fourteen Ways of describing the Rain). The two scores were performed to two successive screenings of the film. Hughess composition uses repeating patterns and polyphonic techniques.

Orchids (1990  2002) is a series of works for solo piano, the exotic floral image of the title suggesting common patterns which underlie gradual changes in the music. A Buried Flame for either chorus or solo voices was commissioned by Bath Camerata. Texts are drawn from Psalm 69 and from three poems from the collection Poems from Guantanamo (University of Iowa Press, 2007), with permission of the books editor, Marc Falkoff.

Ed Hughes - When the Flame Dies