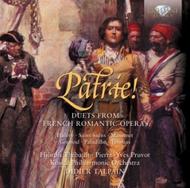 This is an adventurous repertoire of arias from rare French operas, by famous (Saint-Saëns, Massenet, Gounod) and forgotten composers (Paladilhe) - a fascinating overview of 19th century French opera life, in which the serious Drama Lyrique and the lighthearted Opera Comique were the predominant genres.

In the 19th century, Paris consolidated its position as the leading city of opera. Composers from Germany (Meyerbeer, Paer and Wagner, who famously had a very unhappy time there) and Italy (Rossini, Verdi, Spontini, Cimarosa and Cherubini) worked there alongside native composers, vying for public favour in the years following the French Revolution.

Opera was performed in Pariss major theatres (the Opera, Opera-Comique, Theatre- Lyrique and Theatre-Italien) and divided into two varieties  serious works on heroic themes and lighter works based on the lives of ordinary people or events. This divide developed into two fully defined styles: opera comiques and drama lyrique.

The programme of this new recording is shaped around rarities of the French operatic repertoire. Among these are the duet between Adam and Eve from Massenets Eve, a fascinating number with remarkable scoring for soprano saxophone, harp, woodwind, horns and cellos, giving the music a profoundly poetic and supremely lyrical quality.

Also included is a duet from the second act of Gounods Polyeucte, a work that failed to gain widespread popularity due to its combination of opera and oratorio as well as its musical quality.

The title of this disc  Patrie!  is taken from an opera of the same name by the now-forgotten composer Émile Paladilhe. Cast in 5 acts and performed on a huge scale, this tale of the Flemish uprising against Spain was one of Paris Operas most successful works, which continued to be staged until the 1920s, when it rapidly sank into obscurity. Heard on this disc is the supremely intense duet from the first scene of act two.

This recording features further duets by Halévy, Massenet, Gounod and Thomas, shedding light on a number of forgotten gems from French romantic opera.

Conductor Didier Talpain has already received high critical acclaim as a champion of (Early) Romantic forgotten repertoire (notably the works of Hummel, as issued on Brilliant Classics 94043 and 94115).

Great liner notes, including the historical background of the repertoire written by Didier Talpain, are included.